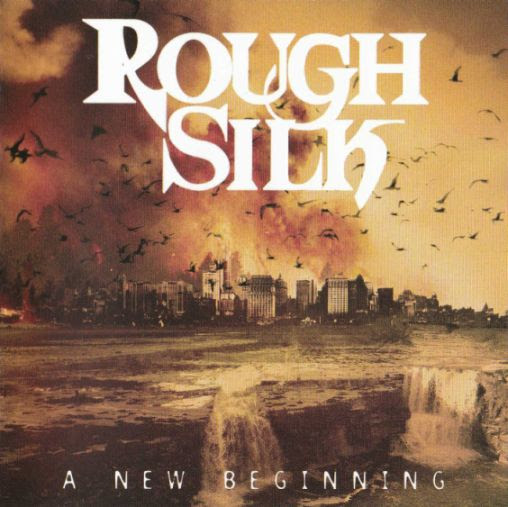 Rough Silk is a German power metal band that I was absolutely astonished to discover had 8 albums. If 2009's A New Beginning is any indication, I'm not sure how they got that far.

The tone of the album is set straight away with "Temple of Evil," a boring mid tempo rocker whose only redeeming quality is a somewhat interesting solo later in the song. "Home Is Where the Pain Is" kicks off with a nice riff, but gives way to obnoxious lyrics, which are chanted over and over again later in the song.

"Reborn to Wait" also manages an interesting opening riff, but any good guitar work plays second fiddle to the vocals. This is strange because singer Ferdy Doernberg simply does not have the range to pull off some of the things he tries. His voice is neither meaty enough like his German contemporaries, nor can he hit the notes that singers on something like an Ayreon album can. I mention Ayreon because there is a moment on this track where Doernberg tries to talk softly with the music cut out before going in to the chorus that reminded me of a moment on Into The Electric Castle, but here the idea falls flat and sounds tremendously silly.

That sort of defines Rough Silk: ideas that might work in more capable hands. With "Sierra Madre" they try to pull of a Western feel, down to the plucky guitar chords, because: why not? There are some catchy segments to the song, although cliche, and Doernberg's pronunciation of Sierra Madre made me chuckle.

The lyric content is all over the map, but mostly human issues. Doernberg covers child abuse, new age religion, romance, getting older, being metal, the plight of Native Americans (!), and "Deadline," an entire song about how they feel about music reviewers.

I was searching for lyrics because there were a couple of lines that made me laugh, but I was instead brought to Rough Silk's Myspace page where Doernberg explains what the lyrics are all about. You don't need his explanation. The lines are devoid of metaphor. For example, in "Deadline" a line goes something like: "you see a flashing sign and you know you have a deadline."

The album gets more and more silly as it progresses. "Black Leather" is the standard metal anthem song: "We're black and leather and holding on forever." It's just that by the end I had run out of palms and faces to put them in.

After the first song I thought A New Beginning would manage an average review, but each song gets progressively sillier until the final piano piece "A Song for Hilmer." I'm not sure I can adequately describe it, but what was meant to be a poignant memorial made me snort milk out of my nose. Maybe next time Rough Silk, maybe next time.

www.myspace.com/roughsilkmusic
Posted by Kiel at 12:23 PM

Agreed. This was a pretty boring album. They do have a few in the 90s which were better (Walls of Never, Circle of Pain) but not so much that I'd recommend them.