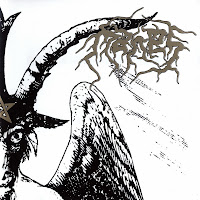 You never know quite what to expect from the next Manes album. The band reminds me of fellow Norwegians Dodheimsgard for their penchant to produce original works of experimental black metal, and then to revert on occasional to their original grimness. That Manes features several members of the excellent and bizarre Atrox is another queue to their refusal to become pigeonholed.

Solve et Coagula is a bizarre beast because only the title track is new. "Solve et Coagula" is a 15-minute plus excursion into black and doom metal, not unlike their early Under ein Blodraud Maan.The track often meanders into a carousel like atmosphere of slow, haunted house doom metal which evokes despair even though the riffs aren't very memorable. The remainder of the album is a re-issue of the Ned I Stillheten demo from 1994, but slowed down a a creepy crawl, becoming almost a droning noise. It's an odd approach to an album, but for some reason...this occasionally works. The old material sounds fitting with the new track, and frankly, more interesting.

"Solve et Coagula" is a grim enough offering if you like bands that live on the left edge of the Norse scene, with plenty of atmosphere, but little to latch on to for the long term. The slowed demo tracks are the stronger here, in particular "Maanens Natt" sounds quite evil. The entire album is suitably lo-fi and organic sounding, and this works to the favor of the material. I haven't been impressed with the past few Manes records, as experimental as they've been, and I still favor Under ein Blodraud Maan as their strongest. But if you're into that 'new weird' of Norsk black metal bands who transcend into the realms of oddity (Ulver, Dodheimsgard, Atrox, etc) you may find some value here. A taste for the obscure is necessary. I should also note that the band is essentially split-up now, this is another of those posthumous releases. The band has morphed into kkoagulaa.

Posted by autothrall at 1:31 PM

I like a lot of covers lately, but this one is pretty sweet.

Also, Malefic and the guy from Shining apparently do vocals on that new track.