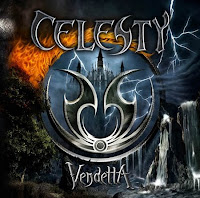 Vendetta is the fourth album from Finland's Celesty, which finds them taking a harder edge towards the power metal genre than their previous efforts. Celesty have produced an engaging symphonic experience and is an easy recommendation for fans of the genre.

Following the standard fantasy establishing intro track, Celesty explode out of the gate with the three strongest tracks on the album: "Euphoric Dream," "Greed & Vanity," and "Like Warriors." Each song demonstrates the band's capabilities and why I'm looking forward to their future work. Antti Railio comes from the Hansi Kursch school of singing and this comparison is most apparent on that second song. Vocals can make or break an album like this and Railio nails it.

There are times when the riffs of guitarists Tapani Kangas and Teemu Koskela tend to drone towards rhythm noise, but on songs like "Dark Emotions" and "New Sin" they demonstrate capable and meaty riffs. Most of the songs feature shredding solos, but fortunately they are backed up by the symphonic qualities of keyboardist Juha Mäenpää (any relation to Jari?). He fills out the sound nicely, takes center stage on many occasions, and generally provides hooks for each track.

The mentioned songs are the highlights of the album. There are a couple of weaker tracks later on and the attempted fourteen minute concluding epic is not up to snuff. That last song "Legacy of Hate pt. 3" is a sequel to a prior album. It is not a bad song, but takes about four minutes to get going. About halfway through it really picks up with some great riffing and solos, but then gets far too indulgent when Railio tries to growl/scream. Presumably this fits the lyrical content, but sounds silly and is something they should avoid in the future. It isn't all a wasted effort. Perhaps Celesty is simply not a mature enough band yet to pull of a song of that length.

There are no doubt weak spots on the album, but Vendetta succeeds more often and is sure to please fans of symphonic power metal. Hopefully they will continue down this path, refine and perfect the sound. We might be hearing something truly epic then.

http://www.myspace.com/celestymetal
Posted by Kiel at 3:17 PM