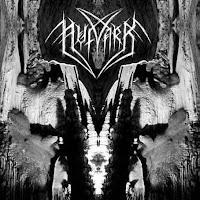 I'm not a religious man but when I hear a band like Vulvark I can only come to the conclusion that:

1. There are Gods Below.

2. They allow things like this to happen, just for me.

Vulvark is the work of one insane German known as Nihilaz, handling all the instrumentation on this debut full-length release (a two track EP was released several years ago). What manifests is a god awful, reeking cesspit of beautiful black noise, buzzing black metal rhythms interlaced with a psychedelic sense of spacing and feedback. Vulvark is a turbulent effort, not for the faint of heart, but it thunders with the venom of forgotten, lecherous kings and the sadism of the void. Over an hour of primal bliss spread through eight tracks, each of which fucking kills.

"Lay Down and Die, Goodbye" opens with tremulous feedback, a sheen of discord that migrates into steady hammering fuzz, foreboding and steadily ascending into a bluesy, dark breakdown over which Nihilaz begins to flow forth the poetry of hatred and despair. I barely survived the 10 minutes of this track to emerge headfirst into the black spiral of ambience and feedback that initiates "Lost In This Maelstrom", a faster and chunkier slab of face smashing hopelessness. I love some of the ghostly tones created by the almost harmonic picking in the blast riff, like the emissions of a foul cadillac of hell. "Imperial Harvest of Ecstasy" is yet again a shift in speed, brutal riffs splashed in neurotic, repetetive speed picking to create a vortex and conflagration. Nihilaz' vocals are completely tormented and drag you directly into his personal abyss. "Hailing Deconstruction (The Elegance of Silence)" is an ominous piece created by slowly strung guitars and feedback, Nihilaz barking occasionally into the reverbrous mirror of darkness. "I Hear the Knives Singing - Decay" swells into a bestial morass of thundering drums as unkind melodic blades hiss through the canopy. "In the Centre of the Black Hall" creates a psychedelic tone of dissonance which it balances with grim, glorious fervor. "Detrevni Kalb Slleb" forgoes the metal for the resonance of tonal chanting and spikes of beautiful feedback. The album closes with the 12 minutes of "For Us to Seek", which runs the range of the entire album before it.

Vulvark is proof once more that life (err...death) remains in the stale black metal genre. Many bands in the underground experiment with the element of noise, but few as wonderfully as this. If you're seeking cheap melodies and instant attraction, this album is not for you. It's a tense and turbulent journey which requires careful attention and the abandonment of all hope. Surrender to its malignant overtures and you'll find it nigh unforgettable. Some of the best black metal of 2009 alongside Oranssi Pazuzu and Arckanum.