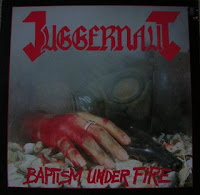 Juggernaut was a pretty crunchy thrash/speed metal band out of Texas, who released two albums in the 80s and was probably most known for having Bobby Jarzombek (Halford, Demons & Wizards, Spastic Ink, Riot, among others) on drums. Of the two, the debut Baptism Under Fire was the better.

The band's style was distinct for me because the bass was very prominent in the mix, running toe to toe with the guitar work. Harlan Glenn also had a pretty interesting vocal style, he could do the melodic mid-range but also had this almost caricature of a sneer which creates some entertaining moments on the record.

"Impaler" starts with some nice clean guitar tones before ripping into the band's noodling, percussive speed metal. You'll notice Eddie Katilus' sporadic but fun lead work which often bursts out when you aren't expecting it. As mentioned, Scott Womack is a skilled bassist and he's running circles around the rest of the band during the rhythm sections. He kicks off "Slow Death" with a flurry before the thrash triplets begin their pumping. This is one of the more memorable tracks on the album. "Cast the Stone First" is a bit more of a traditional melodic metal track. As for the remainder of the album, we get a few passable tunes like "Cut Throat", the tranquil "Purgatory's Child" or the raging, thrashing "Blizzards".

I can't say the album holds up very well, but certainly more than Trouble Within. Although Baptism Through Fire has a few vaguely memorable tracks and scattered moments of refinement, there is a sloppiness created not by a lack of musical talent, but by the occasional uneccessary displays of said talent. "Slow Death" and a few other tunes are worth hearing if you dig old school thrash, and Juggernaut certainly had a sound of their own. Fans of Megadeth and other sneering thrash bands might enjoy the charismatic vocals. I've never loved the album and nostalgia hasn't weathered my feelings.