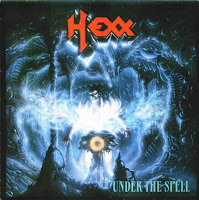 Before Hexx transformed into a hybrid of Bay Area speed and old school death, they released a pair of great 80s speed/thrash/power metal albums that were unfortunately overlooked in the Golden Age explosion. Heavy riffs, memorable chorus hooks and an astute sense of melodic craftmanship are hallmarks of Under the Spell, their second full-length. This honestly fits right in with most of the Shrapnel records roster of the day, such as Chastain or Apocrypha, but the band I'd most closely compare this album to would be the great Vicious Rumors, who share the same guitar heavy styles and harsh but well rounded vocals.

Granted, '86 was a difficult year to stand out, a year in which Master of Puppets, Somewhere in Time, Reign in Blood and others were gaining enormous popularity and reshaping the metal landscape forevermore. But I have to hand it to Hexx, they released a damn fine album. Just listen to the opening track "Hell Riders", with its dominating leads and entirely kick ass, rocking rhythm guitars. The song is fucking intense, you can close your eyes and immediately envision a gang of leather bound rebels riding motorcycles straight out of the abyss while thunder and lightning tear the sky. Extremely catchy song. And it's not the only one... "A Time of War" chugs forth with a great little melody picked through the powerful chords, then breaking out into a catchy sequence of power/thrash rhythm. Dan Bryant's vocals soar over the track as if they were a fiendish collabration between Udo Dirkschneider and Carl Albert. "Edge of Death" cuts like a blade, the guitar tone is excellent, like every other track. "The Victim" crashes through the night sky with a bouncy, juggling rhythm that would be the perfect fit for two guitarists shaking their axes back and forth in syncopation (total Judas Priest-like). For other highlights...well, there's the rest of the fucking album. Have at it!

As I mentioned, the guitars sound superb on this record. The drums are clamorous and crashing, the bass thick and present, and the vocals mesh right in, though they seem slightly loud, it doesn't distract from the excellent tone. Perhaps it's just the impact of "Hell Riders", but I like to think if I ever bought a motorcycle this would be one of the default albums I'd be playing, especially at night on a California highway. Alright, so I'm projecting. And since I'm projecting, I project that if you track down this album you will not disappointed unless you are a fool.