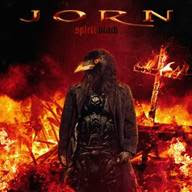 Jørn Lande is one of Norway's most accomplished vocalists in the power/progressive metal genres, having fronted many established acts like Beyond Twilight, Ark, Yngwie J. Malmsteen, and Mundanus Imperium. While he is currently working with Masterplan and his Allen/Lande projects, his most consistent output seems to be this solo career. Spirit Black is his 7th album since the turn of the century, and the man sounds as polished and professional as ever.

I'd like to point out that this album (and some of the previous) only martinally resembles the power and progressive metal so popular in these times. If you're interested in hearing Lande's pipes over these styles, you'll want to listen elsewhere (Masterplan or his work in Beyond Twilight). This solo material is very much rooted in 80s hard rock and blues, given a metallic sheen through some of the lead melodies and the occasional faster, meaner track like "Burn Your Flame". You can hear a lot of Whitesnake, Quiet Riot, and 80s Sabbath here. There's nothing wrong with that, of course, and Lande handles it extremely well. The album sounds excellent, with a first class mix and some great guests like Tore Moren of Arcturus and Igor Gianola of U.D.O. on the guitars. The album definitely has that majestic feel which straddled a lot of hard rock/metal crossover in the 80s and it brought back much nostalgia. If you liked his work with Yngwie you'll probably love this.

Some of the tracks I found memorable here include the driving and bluesy "Below" with its lazy melodies and grooving verse rhythms, and "City Inbetween" with some nice hammering and bells and the most progressive elements on the album. The latter wouldn't have sounded out of place on one of the Ark records. "Road of the Cross" has a nice Middle Eastern flair to some of the melodies, and "I Walk Alone" has some sick groove to its guitars and a powerful performance from Lande. Overall it's not as catchy as something like Burn the Sun, but it's a strong album that should please his diehard vocal fans, as well as that ever dwindling scene who yearns for the new output of 80s metal/hard rock artists (and the solo careers of their ex-members). If you're open to this side of metal, it's worth a listen.