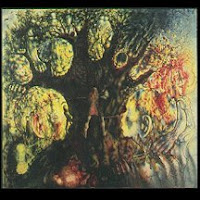 Though they've evolved into the perfect vessel of NWOBHM-inspired melodic heavy metal meets filthy speed/thrash, Deceased started their career with a noticeably more death metal leaning. Granted, this has never quite escaped their sound, the influence of the prototype death metal acts (Possessed, etc) will always have its place in their writing. On the heels of their debut full-length, Luck of the Corpse, the band released this fine EP, which includes a few tracks from their 1989 Nuclear Exorcist demo and a cover of "Voivod".

The title track leads off the EP with a blistering, fast paced thrashing/death anthem oozing with filth. King Fowley's voice is unmistakable for its tortured, full tone. The guitars are crisp and, while the riffs aren't extremely catchy like on later Deceased albums, they are more than sufficient to transfix the listener with morbid energy. "Robotic Village" begins with a wailing sheen of feedback and some thrum before spitting another Slayer-like, brutal riff that alternates into a chug-a-long verse. During the bridge the band explodes into grind territory and some big hardcore/thrash grooves.

Detached senseless life brothers.
They march programmed by others.
In life forever they follow.
In death another lives shadow.....

The cover of "Voivod" is worthy enough, Fowley adding a punkish edge to his voice which is quite cool. The last two tracks are originally from their 1989 demo. "Planet Graveyard" has a melancholic melodic riff which foreshadows a lot of what the band would do with albums like Fearless Undead Machines and Supernatural Addiction. The verse riffs are fueled and grindy, though they wouldn't be special on their own, slathered in King's voice they create an authenticity and primal anguish. "Nuclear Exorcist" is my favorite track on the EP, with a punishing sound between Venom and Repulsion and a great acoustic blues during the verse.

The 13 Frightened Souls is conceptually inspired by cult horror and sci-fi films, and this paranormal/parascientific trend continues throughout all their releases. This fusion of theme and nostalgic death/thrash is one of the reasons Deceased is such a distinct act. Entirely true to their roots, but at the same time, actually doing something new with them, is the forte of this excellent band. One of our finest. Great EP.