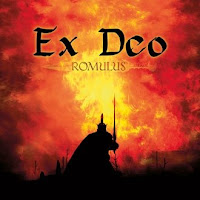 Ex Deo is essentially a side project of Kataklysm; and refreshing at that, since the Canadian veterans have been sagging on the past few albums of that other entity. Romulus is a concept album forged in the fires of Roman myth, folklore and history, and one of the better metal works to have yet mined the subject. Stylistically there is little in common with Kataklysm aside from the simpler riffing, but Romulus is a focused effort which succeeds more often than not.

The use of keyboards to create an historic atmosphere is not quite the novel concept, but here a form of 'epic death metal' has been created which suits the conceptual material. Big riffs and big tones glaring from the synths, like the midday sun off the tips of Imperial spears as the legions march toward their next conquest. The title track leads off the album, an immersive and primitive bludgeon that introduces the listener immediately to just how this album is going to play out. I personally enjoy the martial, orchestral breakdown at the 3:20 mark. "Storm the Gates of Alesia" saunters forth with a driving, melodic riff under a sparsely tolled bell, as the chugging verse explodes with its dual vocals you know you're in worthy war metal territory. "Cry Havoc" rocks hard in the verse, subtle synth textures weaving a glorious gravitas. "In Her Dark Embrace" is laden in doomish melodies, the sorrow of countless battlefields on an eternal road to glory. Other strong points include "Blood, Courage and the Gods that Walk the Earth" for its melancholic death and doom, and the flowing "Surrender the Sun" which has grown into my favorite track on the album.

The album sounds sufficiently bombastic, and the members of Kataklysm have more than enough talent to handle these simpler compositions. Maurizio Iacono combines death and black vocals quite naturally to create a legion-like feel to the lyrics. Barks of anguish, guttural grunts and battlefield cries mesh well over the endless march of the rhythm section. Lead melodies are sparse and used completely in context. There are a few guest spots on the album, including Karl Sanders on guitar ("The Final War") and Nergal on vocals ("Storm the Gates..."), but you barely notice. Romulus isn't necessarily a great album, but it's solid enough that it should appeal to fans of all manner of 'epic' sounding metal. The subject matter may differ from Amon Amarth, Thyrfing or Turisas, but the effect is largely the same, a celebration of European history and folklore with some hard hitting metal accompaniment. Ex Deo is fun for a few listens, and a project I hope these gentlemen return to.