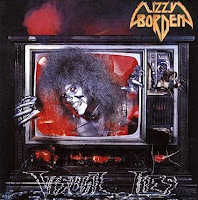 There are a few things one has to take into account to avoid an immediate bias against Lizzy Borden. For one, they were 'glam' in the sense that they wore big hair and trashy 80s metal gear like Kiss or Poison. Second, they were a very theatrical band, and they liked their women in leather with hair as big as their own. Third, Lizzy himself, the vocalist, has a voice which can sooth like a crystal scream or wail like a siren, an obstacle for some.

That being said, they are one of the best metal bands ever produced in the United States of America, with a pretty spotless discography. With all that hairspray, I didn't want to believe it either. Sitting at the peak of this body of work, alongside the rock opera of Master of Disguise, is the excellent Visual Lies. This record has a lot in common with Menace to Society or Love You to Pieces, but it's got a cleaner, accessible sound that in no way hinders the marvelous songwriting.

Every track on the album is loaded with memorable riffs and charming vocal melodies. The guitars are expertly crafted: every hook, every melody, every lead, no wasted notes. "Me Against the World" is power metal lite, deriving its energy from the constant, steady thump of its rhythm guitars and big NWOBHM chorus. In fact, Lizzy's entire style is like a beautiful dedication to the masters of NWOBHM who paved the road for 80s hard rock. "Shock" is another another mid paced track with the huge vocal hooks and delicate, memorable guitars. "Outcast" starts with a great riff, and slows for an emotional, acoustic verse. This verse alone has better vocals in it than many bands have on their entire records...and of course, another of those amazing chorus hooks that should have ensured this band would have dominated radio play if the $$ weren't changing hands for other bands to do so. "Den of Thieves" picks up speed at just the right time on the record, and the guitar work during the verse is simply stunning, with some kickass leads to boot. This is one of my hands-down favorite Lizzy tunes, and for the power metal's fans time and money, the one you want to hear the most on this album.

She's a harlot, she holds the key
She's never free, she's a good time
What you see is a slice of the knife
A piece of life in a heartbeat

The title track "Visual Lies" uses some gentle melodic picking lines to create an incredible atmosphere before the swollen, glorious vocal hooks that could easily have given Cinderella or Def Leppard a run for their money. "Eyes of a Stranger" may not be the equal to Queensryche's track of the same name, but it's an excellent melodic mid paced fist pumper. "Lord of the Flies" once again picks up the pace for some more extremely memorable speed metal. It's almost a shame that so many of the songs on the album are slower, not that they're bad by any means, but it would have been a pleasure to hear an entire album where Gene Allen and Joe Holmes were allowed to just go off. "Voyeur (I'm Watching You)" also has some delightful licks but based off more of a blues hard rock vibe. The album ends with the great "Visions" and its swinging hooks and rollicking percussion.

Visual Lies is easily the best produced album of 1987, I don't hear many albums in the 21st century that come close to sounding this good. Every note is at the perfect level and no element of the music dominates another. With a vocalist this graceful and talented, that's not an easy feat. The guitarwork deserves an award for both its restraint and the sheer amount of quality found in every track. This album is a major achievement and it's a crime the band doesn't get the credit it deserves. While not as directly heavy, the material is easily as catchy as a Primal Fear or Hammerfall, in fact it's superior.