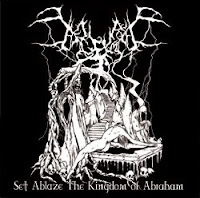 Secondly, what a kick ass band! Set Ablaze the Kingdom of Abraham is an adrenaline rush of Canadian filth, barbaric old school death and black metal which isn't afraid to incorporate catchy leads, punk toned rhythms and in some spots... EXCELLENT doom at a raunchy, slow pace. I was actually sad when this EP ended, 20 minutes just didn't feel like enough!

The EP features three originals and a cover of Autopsy's "Ridden With Disease". "Archfiend" opens with the creepy sample of a woman speaking and then a volley of charnel house death metal grooves over a rapid and tinny drum kit. Make no mistake about it, this band sounds old, old in an intentional way which recalls the pure darkness of the early 90s, emerging death and black scenes. Hellhammer and Beherit sprung to mind immediately, along with a host of others too long to list. There is simply an air of authenticity in this band's sound, as if they took the last 15 years of metal and proudly cast it out the fucking door. "He of Wretched Deeds" creates a Slayer-like, slothful atmosphere of evil before lurching into some blackish doom. "All Devourer" is even more evil, leading off with a Sabbath style riff and then some great old churning death metal. The Autopsy cover sounds a little different than the rest of the material, with some more vitriol to the vocals.

Begrime Exemious is sufficiently sinister to deliver this old school hybrid of material, and the EP is a pleasure while it lasts. Hopefully a deal is in the works for a full length.

These guys are from my hometown! I've seen them live twice in clubs that aren't much bigger than most people's living rooms. High fucking five.

They're touring a bit with Absu when they come through here this month. Nice pick, auto.