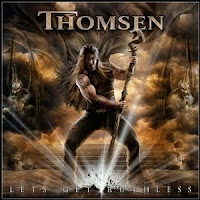 The debut from the German duo of guitarist René Thomsen and Jürgen Wulfes is another of those nods to the old school which is unlikely to please the modern hive of metal-come-latelies. However, for a select few in the old guard, it has a certain NWOBHM appeal that shines through its similarities to Saxon (Wulfe's meaty throatings often recall Biff Byford). Speaking of Saxon, the album's myriad guest spots include guitarist "Nibbs" Carter. Also appearing are Herman Frank (Accept, Sinner, etc), Jan-Sören Eckert (Iron Savior, Masterplan, etc), Neil Murray (Black Sabbath, Empire), Stefan Schwarzmann (Accept, Krokus, Helloween, Running Wild, U.D.O., X-Wild), and Bobby Jarzombek (Riot, Iced Earth, Halford, and many others). Yeah...now I'm out of breath. That's a LOT of veteran credibility, and proof that Thomsen and Wulfes have a very healthy respect for their influences. It must have been great fun to work with some of them!

As far as the music, it's a lot of mid-paced, fist pumping material which recalls the 80s hard rock/metal fringe emerging from its NWOBHM roots. And this is where it works best. "Ruthless" opens the album with a big Judas Priest-like power metal hook with a dash of Sabbath. "Tears of the Sun" has another big hook accented by some little keyboard melodies. Wulfes gets a pretty deep tone here, sounding like a mix of Biff Byford and Blaze Bayley's lower range. The song rocks, one of my favorites on the album. "Heaven and Hell" features some playful guitar licks, and I enjoyed their interaction with the vocal lines. "Bang Your Head" might have a cliche title, but it's a pretty hard rocker which reminds one of a mix between Accept and Saxon's Metalhead album. "Show Me Your Fear" is down and dirty, with a sound like the first two Metal Church albums. "Everything I Ever Wanted" is also pretty good.

If you live and breathe metal from the late 70s through the late 80s, in particular NWOBHM stuff, ballsy hard rock or German power pioneers like Accept or Sinner, then this album is targeted at you directly. I read on Thomsen's site that some of these tracks were written up to 20 years ago, and they sound like it! There are a few tracks which don't quite live up to the remainder of the experience, but it sounds like a fun project and quite loyal to a long neglected sound.

That cover looks like it was rejected work for the Dethklok full-length.