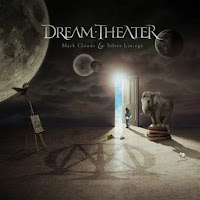 Remember that one girl in high school who would spend weeks, months even, obsessing over every mundane thing that happened to her? The one who took every opportunity to remind you and everyone else that she broke her leg once when she was but a wee annoying little twat? That's Black Clouds and Silver Linings in a nutshell: Completely overblown ridiculousness focused around the most boring subjects imaginable. Nothing illustrates this better than the opener, "A Nightmare to Remember," a glorious, sweeping, epic, occasionally symphonic twelve-minute musical-fellatio session that tells the incredible story of a car wreck in which nobody died (complete with horrible, cheesy tire-screeching sounds a quarter of the way through). James LaBrie croons about how "Life was so simple then, We were so innocent" for awhile before Mike Portnoy interjects with his best Dani Filth impersonation, menacingly informing us that "It's a miracle he lived, It's a blessing no one died, By the grace of god above, Everyone survived."

Not that Dream Theater are new to gross embellishments, mind you ("The Shattered Fortress" is the 6th (and final) in the harrowing series of songs about how much Portnoy likes to get wasted and pummel women), it's just a lot more noticeable when almost every song on the album is a 10+ minute wankfest that tries so hard to be a life-changing experience. Regardless of the silly subject matter, LaBrie's delivery is as solid as always, even if his Hetfieldian singing on the heavier tracks sounds a little forced. Similarly, Portnoy's "I'm so metal guys fuck yeah!" grunts are as dumb as ever, further cementing the fact that he should stick to drumming and keep anything that's not liquor or cocks away from his mouth.

With only six songs total (four of which are over 12 minutes long), Black Clouds... could easily turn into a painful experience, but thankfully the instrumental section is able to keep it fairly interesting throughout. It's mostly typical Dream Theater fare: tons of loosely-tied together tempo-shifts, prog noodling, and Jordan Rudess's annoying-as-shit keyboard shredding. It all works thanks mainly to the phenomenal guitar work of John Petrucci, whose solos are some of his best in years. People looking for impressive technicality won't be disappointed, everyone is on top of their game. The aforementioned "Nightmare to Remember," if you can ignore the lyrics, has plenty of cool moments from everybody not named Jordan, but it also has the aforementioned Cradle of Filth section that's one of the most embarrassing things the band have ever done. "The Best of Times" has a spectacular solo at the end, one of the highlights of the album. Throw in some examples of Portnoy's excellent drumming here, mention the catchy chorus in that one song, and we have a Dream Theater review. Oh yeah and Jordan Rudess is still so fucking annoying that it's worth mentioning twice in one paragraph.

Further detail is pretty irrelevant, if you've heard Systematic Chaos you know exactly what you're getting here: There's a couple "fuck yeah metal!" songs ("Nightmare..," "The Shattered Fortress"), a couple "i'm emotional :(" songs ("Wither," "The Best of Times"), something right in the middle of the road ("A Rite of Passge"), and the epic-beyond-epic 20 minute über-epic ("The Count of Tuscany"), all wrapped in some fucking terrible lyrics. The hardcore Dream Theater fans will eat this shit up. For the rest of us, there's at least enough interesting musicianship to make it worth couple listens.

I would have docked another point for the song titles ;)

I love you. Write more reviews!