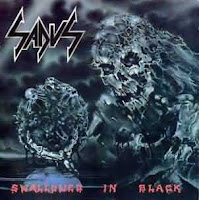 Sadus is best known for the exposure of shred bassist Steve DiGiorgio to the metal cosmos, but the band itself has produced some exciting material both in their early years and the occasional new efforts they release. Swallowed in Black was their brutal and frenetic sophomore album, and while it wasn't their most technical material, it's remained my favorite. Here the band walked the wild side of brusing Bay Area thrash, a blistering chokehold of suffocating speed, crisp guitars interplaying with DiGiorgio's clean yet prevalent bass tone.

"Black" leads the way with hyperventilating guitars and the despotic sneers of guitarist Darren Travis. Musically you can hear a little Slayer in the guitars, but the riffs are windier, a labyrinth of violent impulse. The chorus breakdown is just mean sounding in this track. "Man Infestation" misleads with some ambient tones while a slow, doomy picking serves as the undercurrent below some brutal vocals that continue to elevate over a slow fire until the band just kicks out the frenzy. "Last Abide" is another of the band's breakneck paced spitting thrash tracks, often manifesting the feel of Destruction's faster technical side. "The Wake" opens with a volley of great descending thrash riffs, while DiGiorgio plays. "In Your Face" is one of those extremely short track staples that plagued many a thrash album of the 80s. The riffs are exciting enough that I would have liked another minute or so of the song. Among Swallowed in Black's other strong tracks are the thrash juggernaut "Powers of Hate" and the furious "Arise" (the latter reminds me of what Kreator was doing this year with their masterpiece Coma of Souls.)

The album never struck me as having the best production values, but with this recent listen my opinion has shifted somewhat. The clean bass tones, crisp crunching guitars and live feel of the drums hold up fairly well, unobtrusive and possibly planned this way in advance. There are no fancy effects here, it's just a plug in and play speed/thrash metal album with an added flair for brutality. Though formed some years earlier, Sadus gained their momentum at the turn of the decade, when death metal was beginning to steal the spotlight from thrash. DiGiorgio and crew managed to fit snugly into both mediums, and Swallowed in Black was a worthy effort. It may lack truly memorable riffing, but the cruel vocals and boundless energy somewhat compensate.