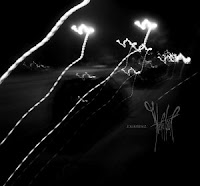 Black metal and shoegazing, two of my favorite subjects. If any band is described as blending the two, I will instantly perk up. To be honest, it's not as uncommon as you might think, a great many of the 'artsier' black metal bands across the world make use of shoegazing aesthetics within both their imagery and composition (Agalloch, Drudkh, Wolves in the Throne Room are all just a few that immediately spring to mind). Heretoir is a the project of Ekletanz who performs all the instruments/programming, and while I feel the material on this EP heavily favors the moody/depressing black metal side more than any indie rock or shoegazer rock elements, they are certainly to be found.

.Existenz is an EP that essentially revamps the previous demo of the same name, with an added track. The six tracks (one is 'hidden') are just over 25 minutes long and despite the slowish nature of the riffs, you never become bored. Ekletanz makes it simple to immerse yourself into his world, a world of fading and streaking city lights, sorrows and regrets. "Erwachen im Dunkel" concocts a dark but euphoric image through its unerrant sense of melodic repetition. "Ein Schrei in die Nacht" picks up the pace with some scathing, tormented snarls and blasting, though the melodic patterns remain intact. "Verblasst" is an acoustic short with some distorted whispers. "Ausgebert" is a lilting, emotional piece with a black crust behind its streaming textures, often broken by piercing cries of despair. "Weltenwander" is basically a black metal snarl spoken word piece over acoustic guitars. The closing piano piece (the 'hidden' track) is quite nice and a fulfilling closure to this journey.

Though the songs are actually quite diverse, the entire EP floats nicely and it's sure to catch the ears of many fans of the more adventurous bands out their cross-pollinating black metal with post-rock and ambient music. I grew somewhat bored with one or two of the pieces, but "Erwachen im Dunkel" and "Ausgebert" are quite good, and I hope these foreshadow more of what is to come from Heretoir in the future.

I had no idea you liked shoegaze that much. Pretty cool!