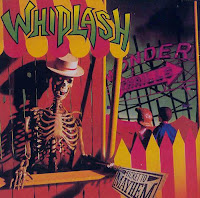 I'd first like to note that Ticket to Mayhem is a great album title, and the cover art here is wonderful. I'd also like to state that this may just be the finest hour for New Jersey speedsters Whiplash. The later Insult to Injury had some excellent, memorable tracks, but this album is just so fast and fun, for the most part. As far as the band's career post-1990, let's NOT go there. I'll just say they played a lot of older material at gigs, and we'll leave it at that.

"Walk the Plank" is the first metal injection of the disc, and it's quite intense, catchy riffs like a wilder, uncouth Metallica meets Destruction. It's also called WALK THE PLANK. "Last Nail in the Coffin" mellows out for just a moment with some acoustics, before a string of power chords start alternating with acoustics and Tony Portaro's wicked vocals. Interesting to put a song like this so near the beginning of the album, but it's still pretty good (again, slightly akin to Metallica from the Ride the Lightning era). "Drowning In Torment" returns to a blood-crazed frenzy thrash barrage, breaking for speed riffing amidst the chug and crash of its verse rhythm. "Burning of Atlanta" has a slightly high seas metal feel, like the thrashier twin of Running Wild. "Eternal Eyes" incorporates some classic blues metal groove to its verse, quite cool. "Snake Pit" is one of those thrashers you don't forget because it's called SNAKE PIT, and also because of the fucking insanely fast picking riffs. "Spiral of Violence" revisits the acoustic intro, but it gets a lot heavier than "Last Nail in the Coffin". "Respect the Death" is an excellent track to lead out the metal festivities, though the album closes with another "Perpetual Warfare" dark ambient piece.

Ticket to Mayhem sounds as it should, razor sharp guitars playing quite fast through much of the material. Tony Bono (later of Into Another) is a good, fast bass player and keeps the single-minded shred of Tony Portaro anchored. The drums of Joe Cangolisi are energetic for their day, and all of this combined makes the album hold up well in today's metal clime. The lyrics are quite mediocre, but they suffice, as most of the songs are quite good. Definitely a nice American alternative to the wilder days of Kreator and Destruction, and perhaps what Metallica might have sounded like had they gone all balls out instead of the progressive, grounded thrash of ...And Justice for All.