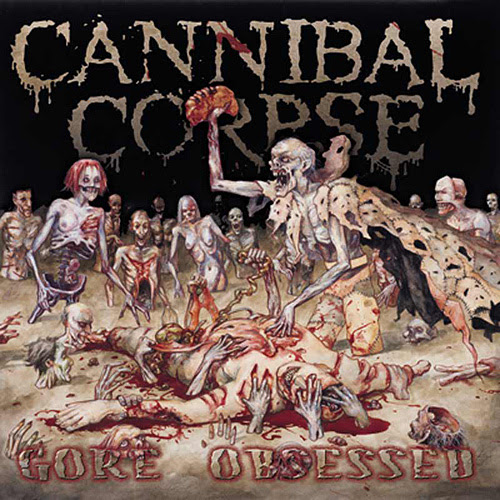 Cannibal Corpse is probably the most successful death metal band of all time, and certainly one of the best. These veteran propagators of good old-fashioned American violence have been spilling blood for more than 20 years, and unlike many popular metal bands these days, deserve every coagulating gallon of their success.

2002's Gore Obsessed is their fourth album featuring Corpsegrinder, my preferred frontman for the band. The record opens with a killer track in "Savage Butchery" and never lets down. "Hatchet to the Head", "When Death Replaces Life", every track is a broken neck waiting to happen, perfect for drowning out whatever music the vato in the car next to you is blasting. The album doesn't blaze any new ground, but why reinvent the chainsaw?

The high point of the album is absolutely the third track, "Pit of Zombies". A brutal depiction of one man's agonizing transformation into finger food for ghouls, it also has my favorite moment on the album: If you aren't possessed by bloodlust at the song's climax into the sick, sick, sick solo at 3:15, you are not my friend.

Although it doesn't reinvent the wheel, Gore Obsessed is another glorious autopsy report in Cannibal Corpse's legacy of brutality.

Oh, and get the version with the cover of Metallica's "No Remorse". You'll thank me if you survive.

Never been that big a Corpse fan. Maybe its time I give them another go

Seriously, every album with Corpsegrinder is a diamond with the exception of 'Vile' and 'The Wretched Spawn'.

This is the review I wrote for the album on Metal-Archives. As promised, posted only in the comments of DKN's original.

I might be in the minority for thinking it, and I couldn’t care less: Corpsegrinder-era Cannibal Corpse has been the peak of their career, a long pattern of excellence marred by only a few average, inoffensive offerings. Sure, the days where this was a novelty act used to scare your parents and sicken your girlfriend were long past them, exiting the band with Chris Barnes, but lyrically and musically they have been no less maniacal, no more forgiving. If Gore Obsessed, the band’s 2002 offering and 8th full-length overall, suffers from anything, it’s that it followed their masterpiece Bloodthirst, and partially feels like more of the same methodical, battering carnage.

The difference is primarily through the production. Where Bloodthirst benefited from a fulfilling, choppy, thick Colin Richardson production of surprising depth, the band turned here to the equally well known Neil Kernon. Gore Obsessed thus has a drier, more level tone to it, if no less punishing. On the one hand, this might seem lackluster in comparison to the Y2K flesh monolith, but on the other, it actually helps distinguish the songs somewhat from that monstrous work in the overall scheme. It’s also a bit longer, and has an overall lesser ratio of flawless riffing. Tracks like “Savage Butchery” and “Hatchet to the Head” are not exactly catchy, bursting past the listener in a stream of flailing, separated limbs, yet their energy and authenticity is certainly worthy of passing off the bonesaw to the rest.

The album really starts to pick up with “Pit of Zombies” and its slamming, thrashing verses which bounce the listener back and forth as if his/her corpse were strung out on a surgical ping pong table, two mad doctors paddling his/her innards back and forth to one another. “Dormant Bodies Bursting” is another bruiser with its churning mid section, and “Compelled to Lacerate” turns to another of those escalating, winding mute rhythms that so dominated Bloodthirst. Other favorites here would include the corrosive bombardment of “Sanded Faceless”, the compelling structure of “Hung and Bled”, its grooves yet again recalling the more atmospheric roiling sequences of Bloodthirst, or the head caving blunt instrument that is “Grotesque”. In fact, once you get past the first two tracks, its quite solid for the entire remainder, never alleviating the audience from its savagery.

The cover of Metallica’s “No Remorse” is quite well done, but then, Cannibal Corpse have always taken such tributes seriously (just listen to their version of Razor’s “Behind Bars” and smile). In the end, I’d probably place Gore Obsessed directly betwixt its nearest neighbors in the band’s discography. It’s not so much perfect as Bloodthirst, which is simply one of the best death metal records I’ve heard in some 20-25 years of the genre; but it’s slightly more cohesive and carnal than Gallery of Suicide, even if there are individual tracks on that album I might like more than these. Cannibal Corpse seem to take a fair share of undeserved heckling for whatever political scenester nonsense is hip this week, but they’re a fantastic band who have only grown more reliable with age. The riffs, the power, the brutality, all intact here, all sharpened to precision and prepared to box in the ears of anyone actually listening.