Flotsam and Jetsam - Doomsday for the Deceiver (1986) 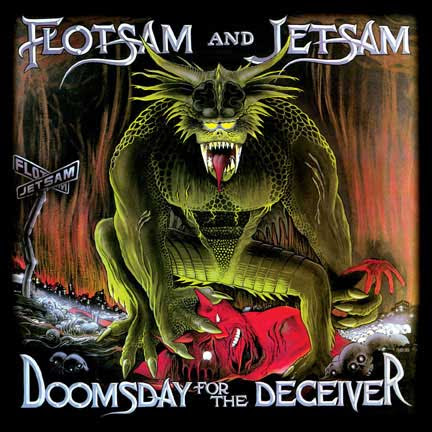 There isn't much a local metal scene in Phoenix. Dave Mustaine has a house in the area. Other than that there are a number of terrible tough guy metalcore bands and a few experimental acts that are never going anywhere. Fortunately back in the 80s we had Flotsam and Jetsam. While they are still kicking around somewhere they released their best work back then and their debut Doomsday for the Deceiver is a record for any thrash fan's collection.

It is difficult to avoid comparisons to Metallica with this album, not just because Newsted is on bass, but rather because it really feels like a follow-up to Kill 'Em All. Almost as if this was another path that the band could have taken. Eric Knutson sounds like a 1983 Hetfield: young, angry and willing to shred his vocals chords on a number of chilling screams.

Most of the songs are uncomplicated but they have a couple of longer numbers including the title track and the next song "Metalshock." "Doomsday for the Deceiver" was likely conceived after Flotsam and Jetsam heard "Fade to Black." Following a somewhat similar intro it gets much thrashier and features some of the slickest riffs on the album.

Flotsam and Jetsam are at their best on songs like "Desecrator" and "Hammerhead": fast as you can picking, complimented alternately by punishing riffs and shredding solos, which are in turn punctuated by screams, wails and whatever other utterances Knutson can manage.

Doomsday for the Deceiver is a solid example of the genre, but I'd definitely only recommend it to fans that have consumed the more popular offerings and are looking for more.

A good, well-rounded album, but I prefer 'No Place for Disgrace'.

Here's my review, as posted to Metal-Archives:

I'm about as attuned towards the wonderful wealth of 80s metallurgy as anyone. This was the period in which the personal, prepubescent interest in those rocking records I received as occasional gifts from friends and family flowered into an obsession. Hard rock and metal music no longer flew in with the birthdays and holidays, but became something I actively migrated towards armed with my weekly allowance, paperboy funds and earliest teen paychecks. I've made it no secret that I consider the 1986-1990 period to the most enriched and important across numerous sub-genres, but I'll admit that are certain efforts which might be considered 'sacred cows' to some that I don't hold the same high regard for.

Doomsday for the Deceiver, the Flotsam and Jetsam debut through Metal Blade Records, was one such album. Before I proceed, let me clear up any confusion: this is a good record. I like a number of the songs. In fact, I'd place 2-3 of them among my all time favorites from the band. But despite its novel hybrid of power and thrash metal mechanics, and its place as a launching ground for the career of one of metal's most famous bassists, Jason Newsted, I have simply never found Doomsday all that consistently entertaining or memorable. Part of this is that, in retrospect, I realized just how goddamn great the band would become for its successor. No Place for Disgrace is such a dynamic and inspired beauty of a beast that Doomsday feels 'Plain Jane' by comparison.

Certainly that doesn't make the debut a slouch, but it has never been one of the more distinct, in my opinion, among the burgeoning speed/thrash scene taking place at this time. For example, compare it to Reign in Blood or Master of Puppets. Phenomenal albums. Two of the best I've heard in my life. In any genre. Darkness Descends or Bonded by Blood? Far more aggressive and sinister, making this feel like fluff by contrast. Perhaps a closer correlation would be to Overkill's first two albums Feel the Fire and Taking Over, but as much as I liked Eric A.K.'s style, he was no Blitz when it came to sheer ferocity and charisma, and there are no songs here with the zeal of "Rotten to the Core", "Deny the Cross", 'Electro-Violence". Flotsam's own "Hammerhead" was never quite so fun for me as that other band's "Hammerhead".

But when this album kicks, it does so with a premium gasoline injection. The Arizonans were pursuing an interesting path that placed them somewhere between the West Coast speed and intensity of Metallica, Megadeth and Slayer and the more traditional roots of British influences like Judas Priest. A.K.'s, thin, high tones were not so gravelly or oppressive as someone like a James Hetfield, nor so nasally vicious as Mustaine, but he had this unique, silken frenzy about him akin to Lizzy BOrden which was surely the start of something. Lots of shredding guitars, even some showing off in the intro to "Der Führer" over the glinting acoustic. A hint of the same neo-classical picking influence that Texans Helstar would pursue from around 1986-1989 can cleary be heard on the 9 minute title track epic, which is easily my favorite single song on the entire album.

Of course, I should talk about the bass, which is great and must have been at least part of the reason Newsted got his gig with the big 'M'. Muscular, acrobatic and never content to simply doppelganger the guitars, Jason was all over this, a more demented Steve Harris, audibly louder than the 4-stringers you'd hear on comparable albums, and rightly so. The guy is just nuts on something like "Metalshock". I can't speak so highly of the leads, which I find to be the sort of frenetic excess that rarely provokes memorable lines, but the rhythms are solid and dynamic enough that they earn some points with the explosive quirks through "Desecrator" or the substantial 6 minute instrumental closer "Flotzilla" (the precursor to "The Jones").

Why the album never totally worked for me is just that the songs are not all that great. "Fade to Black" (nothing like the Metallica tune of the same name), "Iron Tears" and "U.L.S.W." (the first of their many acronym song titles) haven't left me with much of an impression. At best, they're average riff patterns molded after Maiden and Motörhead and applied with a severe case of hypertension. Often A.K.'s screams feel unformed and placed into the vocal patterns just for the fuck of it, a pretty common flaw back in those days, where on the sophomore they feel perfectly positioned. The album also feels pretty long at 55 minutes, and I almost wish they'd just trimmed the three songs I listed above.

Granted, "Desecrator", "Doomsday for the Deceiver" and to a lesser extent "Hammerhead" all provide quite a rush of excitement and hint at the sheer riffing potential and wealth of musical proficiency contained in this group, but Doomsday is just not an album I often wish to experience in its fullness. Brian Slagel and his crew (including Bill Metoyer) did a good job of capturing the palpable velocity of the band's performance, but even thinking about this debut makes me long once again for its next eldest sibling. Then again, if I were to face this off against any of the band's post-1988 material it would prove an easy victor, a first round knockout. So I'm loathe to challenge it's cult classic status, because at the very least it's a band rising towards its potential rather than crashing from it.

PS: I'm glad they ditched the 'Flotzilla' mascot, which looked pretty dumb. I'm not opposed to it getting its own instrumental though its place in the lyrics to the title track here slightly soils the song.