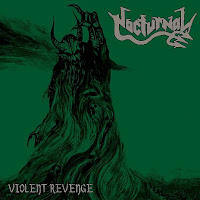 Nocturnal are one of the most tireless and prolific bands in the black/thrash crossover underground, having released a wealth of splits and EPs since the turn of the century. They fully embody the DIY attitude and pure thrashing roots of the very best of this style. Violent Revenge is only their second full-length, but it has an undeniable polish and an orgasm of riffs that will satisfy any hell banger of filthy 80s speed metal and roots black vitriol.

The abyssal gates spit forth "Hellhunt", a rapid killer in the vein of classic Tankard, Kreator, Possessed, and Venom. In particular I love the chords during the bridge. "Atomic Warfare" slows for a crunchier mosh pit rhythm intro, but soon picks up into savage speed metal territory. "Slaughter Command" is just sick, one could easily imagine Destruction writing a song like this back in the mid 80s. Amazing riffage and you will seriously want to hurt someone after hearing it. "Death is the Answer" leads off with a majestic string of chords before speeding into a punkish/thrash piece worthy of crossover worship. The rest of the album likewise seethes with authentic riffing and violent demonic spittle, I sincerely recommend "Beast of Hades" and "Swarm of Insects".

The album has a sound meant for vinyl, the guitars crisp and the vocals sneering. The only black metal here is really in the vocals, otherwise this album would have gladly fit in the anno 1987. All the songs are excellent and as a whole I enjoyed it more than their previous Arrival of the Carnivore or many of their EP releases. If you're a fan of the more authentic black/speed hybrids like Aura Noir, Maze of Torment, and Bewitched, then this is essential listening.