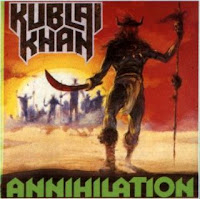 Kublai Khan were another of those one-shot thrash hopefuls of the 80s to feature the former member of a more successful band. A small amount of buzz, a single album, and then nothing. In this case it was Greg Handevidt, an early member of Megadeth, who performs both guitar and vocals on this release.

Annihilation is not so bad though. It has that rough and rugged, dirty speed metal aesthetic which a lot of bands are emulating these days on principal alone. "Death Breath" is a pretty exciting tune, you can hear a little Celtic Frost in the opening riff, then pure Bay Area-style speed not unlike Death Angel. "Mongrel Horde" opens with a pretty cool melodic thrash riff, then the band breaks into some blistering speed. Handevidt's vocals are pretty demented, and the manly backups give the impression of...well...an American thrash band trying to emulate a mongrel horde! The breakdown at the 1:20 mark is sick and would have created some great mosh pit memories. "Down to the Inferno" again reminds me of Celtic Frost with its classy descending into chord pattern, but the lead is extraneous and the rest of the song is fairly weak. "Liars Dice" is a nice exercise in sheer filth and speed, and the epic "Passing Away/Kublai Khan" has more than enough bang for the buck. "Clash of the Swords" is a mean spirited shredder with some killer riffs, it is likely my favorite tune on the album. "Battle Hymn (The Centurian)" begins with a very awkward 'Hello' before transforming into another flurry of venomous speed dirt.

To many, the album will sound like crap after all these years, but if you're a little less demanding than the average corn fed Dethklok nutter you will appreciate the raw production for what it was. Hell, half the metal bands around today are trying to emulate this primal naughtiness, whereas back in the day it was just a lack of budget. Annihilation is a decent record for its time, and despite some thin drumming and a weaker tune, purists may derive some enjoyment, especially those who worship Kill 'Em All or Killing is My Business.