Aherusia - And the Tides Shall Reveal the Traces (2009) 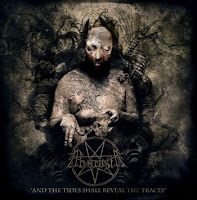 Though this band has existed for over a decade, And the Tides Shall Reveal the Traces is the first full-length release. Aherusia is a Greek entity performing a deeper style of symphonic black metal. Rather than opting for the sweeping style of sympho black (ala Dimmu Borgir), the instrumentation is embedded into the mix and serves to buffer the melancholy of the guitars. This is not a band you listen to for 'excitement', the picture they paint is one of ancient sorrow and mystery, and to this extent the album is successful.

"Birth of Immortals" emits a gothic dusting of synth tones, before the accented clean male vocal announces the arrival of the guitars, shifting from subtle melody into a lilting folk march of chords and Cretian lyra. At last, the band commits in full, the chords flow over glorious strings and warlike drums, while the rasp of Voreas Faethon whispers tales of olde. He will often break back into a cleaner goth low register, but this is executed tastefully and feels natural rather than cheesy. With "Lux Occulta", the lyra once again features prominently, but held back just below the guitars to create a wonderful unison with the keyboards. The guitars rarely do anything special, but as a layer of paint to this mysterious portrait they function adequately. "Beyond Death and Time" features some nice chunky blocks of riffing amidst the dense atmosphere. "Eros Aenaos" is another of the stronger pieces, gradually building up its momentum to a glorious crescendo.

The album is far from perfect. Oftentimes the songs sound too similar to one another, as though you could question where one begins or ends, and so many of the sections move at an identical pace. This can cause an ennui to develop while listening, especially in the longer tracks. The use of the lyra is nice to give the compositions an authentic folk tone, and frankly we don't have enough Greek dark/folk metal as it stands, so it is refreshing to have a band like Aherusia. The band has a way to go to arrive at the company of masters like Rotting Christ or Septic Flesh, but with their ability to evoke melancholy and the use of traditional instruments, there is quite the potential here. I was not impressed by And the Tides Shall Reveal the Traces, but it's not bad, and I will be listening for future output.