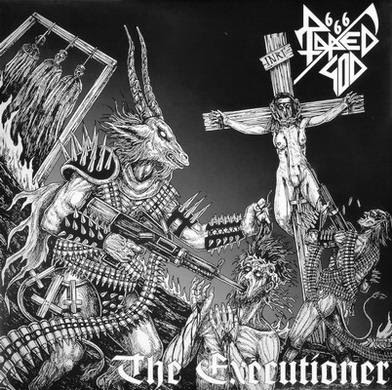 Their name is silly, but Raped God 666 delivered a non-stop thrash attack with 2008's The Executioner. They hail from Mexico, but the German and U.S. thrash influences are immediately apparent. Each song leaps forward at breakneck pace. They don't waste their time with slow rockers or acoustic intros.

The production is rather rough and you might recognize the drums on the opening track "Devilish Aggressor" as being somewhat reminiscent of that time Lars Ulrich tried to sound raw on a million dollar production. This is easy to overcome, however, because this is exactly the type of record that is likely as fun to listen to as it was to produce.

Stand-out tracks include "Massive Destruction Attack," which is pleasantly fast and heavy for the first half, but then guitarist Luis Lee apparently decided they weren't thrashing just hard enough and so kicks everything up a notch at about the two and half minute mark. That is the finest thing about the album: no pretensions to be anything other than fast, heavy and fun.

As you can tell from the hilariously awesome cover, which I'm pretty sure is a Chupacabra blowing Jesus' brains out, anti-Christian, war and death themes pervade the album. They use the word destruction twice in song titles, but one time it is in Spanish so I guess that is ok.

The bad news is that apparently Saul Martinez, the drummer, died earlier in the year, so the fate of this band is unknown. It would be unfortunate if we never saw another thing because The Executioner is a great old-school thrash record.

I'd buy this based on the cover art alone. Congratulations, yak, you have sold me on a band.