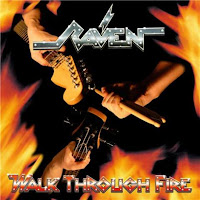 2009 marks the 35th year of existence as a band for Raven, even though their debut released in 1981. 35 fucking years of heavy metal, can you imagine that? Worth a clap and a nod in any case, but Raven goes one beyond that because they are still releasing material that kicks ass! Walk Through Fire is their 12th proper full-length and it contains all of the energetic speed and thrash-infused NWOBHM we've come to expect. The album most reminds me of their late 80s material, which is some of their greatest (Life's a Bitch and Nothing Exceeds Like Excess).

The guitar feedback swells up for an intro piece before "Against the Grain" volleys forth like a silo of warheads aimed straight at your ass. This is hot stepping frenzied riffing with John Gallagher's fun vocalizing, which ranges from a seductive mid range to his slightly off-kilter wails and squeals. "Breaking You Down" places your balls directly in a vice and begins hammering them with 80s hard rock flair and a mean, thrashing verse, laden in brother Mark's quirky fills. "Under Your Radar" is targeted more directly for the speed/power fans, killer double-bass driven metal without any lack for spastic leads and melodic grace. "Walk Through Fire" kicks some ass with its shifty chords and meaty thrash foundation, not to mention the classic Raven vocal hook for the chorus. Excellent. "Bulldozer" is a heavy dose of blues metal which could start a brawl in any backwards pub in the universe (if not, the universe is no longer worth living in). Other great tracks include the pummeling "Grip" and the sultry, melodic "Armageddon".

Walk Through Fire sounds just like the band in their heyday, even if it benefits from a modern studio setting. Though the band thrives off its explosive energy and 'fun factor', there is surprising depth to many of the compositions. Never is a lead wasted, they are always catchy and inserted into the tracks at the exact right moment. This is easily the band's best release in quite some time...actually about 20 years. Nothing Exceeds Like Excess was probably the last Raven I enjoyed this much, and I may end up liking it even more. This is a band of survivors who deserve all the accolades one could heap upon them. The real deal. I only hope I can remain as metal as them when I reach their age.

Holy shit. Look at that cover.

I want to listen to this album in while driving through the desert at night in a Camaro.

I can picture that.