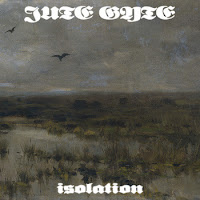 Isolation is the fifth album I'm reviewing from Adam Kalmbach's Jute Gyte, and I can say with certainly that I've yet to be disappointed. In fact, this is precisely the direction underground black metal in the States needs to take: textured, creative and intelligent without shunning the conventions that were originally conceived overseas by the genre forebears. Part of Kalmbach's charm does originate from his heavy investment in nuance and experimentation (a lot of albums under the Jute Gyte brand eschew the metallic ingredients entirely in favor of other styles), but really when you strip away the influences it comes down to his skill at bare bones sound architecture and songwriting. The guy can keep you engaged for often 9-11 minutes per track, even through the more repetitious sequences, and that's more than I can say for most trying their hand in this field.

Immediately, the poetic imagery of the lyrics and the driving depth of the chords to the opener wrap themselves about the listener's ears like a caul of warmth and carrion, tortured and desolate yet strangely alluring like a sunrise on a frosted, open plain. "The Hopelessness of Passing Time and the Melancholy of Unalterable Past Events" is one mouthful of a song title, but its fitting to the nostalgia imparted through the beautiful, somber and romantic trails of melody that are carved out over the denser fibers of the rhythm guitar, not unlike some of the more modern, progressive Enslaved records. The second piece, "Age, Separation and Cold" is at once more high pitched and dissonant, driven into the listener's brain over 9 minutes of blasting with breaks into slower vistas where the guitars continue their acidic reign over the steady, mid-paced drums. Isolation deviates further left of center with more of a post-metal deconstruction in "A Wind Upon the Open Fields", or the thrashing indoctrination of "The Cry Essaying the Waters", or the jangling post-punk belligerence of "The Irreality of the Past" in which Kalmbach evades the usual rasp in favor of a guttural aesthetic to his voice. Intense.

However, by far my favorite piece on the album is actually the titular "Isolation": a 7+ minute foray into pure, scintillating ambiance which is easily one of the best I've heard of its type lately. Through simple flute-like synthesis and airy textures, you're hurled into this sad, expansive terrain in which you feel as if something major is just about to happen. Perhaps the grasslands will flood with rain from a restless sky, or perhaps the earth will just rise silently and swallow you, but it's an incredibly effective and poignant means of escape. I feel like the only downside to this track is that it's so blindingly awesome that the rest of the disc almost seems pale by comparison, despite its own ingenuity. All I know is I've listened to this on repeat about a dozen times one afternoon, numerous times since, and I'm completely hooked. Granted, I'm a sucker for the stuff.

As usual, with any Jute Gyte release you're getting the great DVD packaging, simplistic natural artwork that truly reflects the aural environment contained within the music, and humble production values which capture all the grisly hiss of the black metal underground, incendiary guitars, machine gun mechanical blasting, and lush rasping vocals. There are a few points at which the drumming can become monotonous, and the curves of the bass lines are often inconsequential, but otherwise this is another floodgate of melancholic aspiration which deserves any earspace you might grant it. Past Jute Gyte recordings have, in truth, felt more eclectic and varied in nature, and I may not have been engaged by this quite so fully as Old Ways or Impermanence, but Isolation is worth having for the title track and the opener alone, the rest is just an added icing of pain, an hour of fitful release. It's time to start talking about this project with the same reverence once given to US underground mavens like Xasthur and Leviathan.