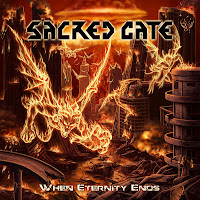 Sacred Gate is a fairly new German band performing a brand of heavy power metal in a decidedly 80s fashion, in that they set the rhythm guitars to chug along in cruise mode, fire up the bold, simplistic melodies and aim for a huge chorus and decipherable lead in each individual track. Tradition is not necessarily a crutch in this case, and several of the members have years of experience performing in other, similar acts since the decade before last, but clearly When Eternity Ends is not aimed at the younger generation of power metal freaks bred on the busier, heavily digitized and brickwalled tracking sounds you'd recognize from an act like Gamma Ray or Blind Guardian. This is far more along the lines of early Accept, Judas Priest, and perhaps even a touch of Running Wild in the band's devotion to big rhythms and airier production.

Thick bass lines course through the veins of the bulky rhythm guitars like veins of precious ore, reminiscent of Steve Harris' penchant for keeping things busy without attempting to divert from the central note progressions. The rhythm guitars themselves don't do a hell of a lot out of the ordinary. You've heard most of them before, and they're merely used to set the pace and allow the vocalist, Jim Over to mete out his rather distinct vocals, which as often as not carry some of the tracks. I've listened to this disc a number of times now, and I can't quite figure out whether I love the guy's style, or find it mildly irritating. Or both. He's got a lot of lower end grit to him that you'd expect from other German vocalists like Rock'n'Rolf Kasparek or Chris Boltendahl, but then he shifts to this higher pitch which has an air of fragility to it. With a catchy chorus like that found in "Creators of the Downfall", with the supporting rhythm guitar melody, or the Maiden-like pumper "Burning Wings" I think he really struts his stuff.

Not so much the case the later into the album you go, not because the vocals or music differentiate all that greatly, but the songs feel like diminishing returns, if only that so many of them keep on the same course in terms of their speed and delivery, with only minor deviations. For instance, "In the Heart of the Iron Maiden" sounds more like...you guessed it, a Germanic iteration of something like "The Trooper" if it were dowsed in loads of melodies, while "Earth, My Kingdom" has a slower bombast driven by the bass line which belongs more to the Manowar camp. In general, though, they keep it to a mid-paced maximum, so you're never getting an outburst of speed nor a particularly slower, pensive piece. Ultimately, I thought the first half of When Eternity Ends was notably superior to the latter.

There is also this angels vs. demons, Heaven meets Hell apocalyptic vibe to the lyrics and song titles that lives up to the cover art. I'm not sure if the album was constructed for those of a heavily Christian persuasion, but mileage may vary: since I don't put much stock in celestial and infernal beings doing battle over my city, it doesn't work for me as much as it might for the next person. That aside, there aren't a lot of other complaints about this record. It's a solid debut, nothing exemplary but it packs a few memorable tracks, and I like that Sacred Gate are eschewing trends to play the music they grew up with. This is pure heavy metal with no apologies. They've got chops, they've got a front man who doesn't sound too much like anyone else, and they present the songs in a brazen manner which feels loyal to the nuclear destruction on the cover. I might not have a strong reaction to all the songs here, but a little more inspiration to the songwriting could push them over the edge.