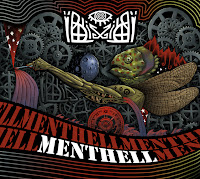 Possessing one of the most unique styles I've encountered of late, Poland's Iblis come across like a demented cabal of asylum escapees in dire need of their medication. And I mean that only as a compliment, because the band's self-proclaimed 'Nuklear Rock'n'Roll' is an exercise in charismatic, schizophrenic vocals applied to blast beats, dense progressive black metal chugging flurries and rich, flowing bass lines which tie it all into this morass of semi-technical, expansive neurosis. Simultaneously cerebral, humorous and tortured, everything from the band's surrealistic cover artwork to their incredible logo to their frenzied musical mish-mash is deserving of attention well beyond the underground of their homeland.

To describe these vocals is no easy task, but if one combined the Gothic pinch of Into the Pandemonium era Tomas G. Warrior, the wavering forte and unnerving timbre of Jari 'Big Boss' (Root), and a pantheon of more conventional black metal snarlers, then you might begin to understand the acrobatic tongue of front man Zgred. He's all over this record, escalating into sheer insanity as he frolics through a track like "Don't Eat My Legs" (that's actually the song title) where he transforms from a gruff, blunt manliness into this totally fucked narrative of chaos in the bridge, counterpointing himself as if he were some quartet of male and female psychopaths.  But his prowess is not the only innovative stamp on this record: the bass of 'Traktor' is insanely accomplished, bridging the gaps between metal, jazz, funk and progressive rock. The guitarist Borsuk flexes between dense, hyperactive black/thrash passages in the Norse tradition and ringing, spacious post-metal elements, and the drummer Szafot holds it all down, effortless pacing between blast beats and uncanny rock grooves.

I wouldn't define Iblis as 'avant-garde' as something like Arcturus, in which the metallic component has been almost entirely replaced by versatile genre hopping madness. Menthell certainly maintains an aggressive core, using the elements and funky exploitation of the bass lines as its primary vehicles towards eclectic variety. But the weird, almost conversational tone of the vocals in songs like "12 Sycamores" instantly creates an alien atmosphere to the proceedings, almost as if there were no vocals and your own brain were creating an internal, tormented monologue to accompany the rampant athletics of the music. Even the wacky whistling and ghostly tones in "Poison In Your Food". Not all the individual riffs stick to the conscience, but there are enough flying in your direction that you can listen through a number of times and remain engaged.

On my own first sit-through, I had feared that the actual eccentricity of the vocals in combination with the riffs was meant more as something shallow and silly to stand out, but repeated exposure proved this is not the case. There is a practiced rhythmic sensibility to everything going on here, as if someone were setting a metronome for a descent into the chaos of the subconscious, and as such "Menthell" is only too apt a title. I would certainly recommend this to fans of outsider extremity, but just understand that it comes with a certain subtext of dark, comic angst that flavors its agonizing depths.