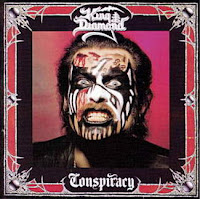 Conspiracy bears immediate distinction as the first King Diamond 'sequel' album. It is not the only case of this happening in his career, but whereas Abigail II was separated from its narrative predecessor by a span of 15 years, this arrived just over a year after "Them" had, and there was quite a lot of anticipation from a portion of the band's fans to see what exactly would happen to this central 'King' character when he was all grown up. Personally, while I appreciate the thought he put into them and found the ideas unique at the time in terms of concept albums, I have never found the actual 'stories' in most of the albums all that compelling (with the possible exception of The Eye). 'King' returns to his ancestral home, drafts up a few terms with the malevolent spirits there, and gets to visit with his dead sister while others, corporeal or otherwise, conspire against him and his inheritance. Big whoop.

But then, Conspiracy doesn't exactly need to aspire to Stephen King or Clive Barker levels of fictional quality, because the music written for this thing is so splendidly contagious that it ranks among one of the best in all the King Diamond canon, and a crucial cornerstone in his winning 'streak' that persisted from his Mercyful Fate years through 1990's witching masterpiece. I would argue that this was the technical peak for the band, in terms of the band's arrangements and instrumental proficiency. Not that Andy LaRocque couldn't pull out a more difficult or intense lead somewhere down the roll of years, but this album put such a cap on the level of ability that it's successor, The Eye had no choice but to broach a more atmospheric direction (which I'm thankful it did) if Petersen and friends wanted to experience any sort of growth or evolution whatsoever. Conspiracy is just that precise, intimate, intimidating, unique and well written that it makes a great deal of both the US and European power/speed metal of the mid to late 80s seem positively infantile by comparison. And I don't make such a statement lightly, because that period represented a clear summit for the style.

Just as one might expect from a sequel to the spectral "Them", much of Conspiracy is devoted to building a haunting backdrop for the surgical techniques of the core musicians. You'll hear a lot of funeral organs, schizoid whispers and synthesizer glaze coursing through the album to better compel its central theme. Miraculously, the Danes decided to avoid clotting up the album with brief, narrative ligaments. Only the shock feature "Let It Be Done" is anything less than instrumentally rewarding, and this even has some freakish pianos along with Petersen's deeper spoken word timbre. There is one instrumental "Something Weird", but the phantasmal melodies that Pete Blakk and LaRocque morph into the keyboard orchestration are so rich and wondrous that it becomes one of the most striking pieces on the record, sans vocals or steady percussion. After all, they had a thing for fantastic instrumentals, the melodic acoustics of "Insanity" off The Eye will haunt me forever.

Everywhere else, though, Conspiracy is built on the backs of a staggering array of metallic riffing that could rival anyone else coming out of such a creative European field in 1989. One might struggle to define this album as either speed/thrash or heavy/power metal, for surely it contains enough elements of both to qualify it as a hybrid of these and even a touch of progressive/speed not unlike what younger Stateside masters Toxik and Realm were producing at the time (also in the extended Roadrunner/RC Records family). You'll hear steadied, rampant triplet rhythms, delirious outbreaks into speed and flair akin to what Randy Rhodes and later Zakk Wylde brought to the Ozzy Osbourne solo camp, flashy and effective lead sequences. King Diamond had been implementing the blues-based grooves as far back as Mercyful Fate, and certainly we heard a few through Abigail and "Them". But with Conspiracy, they become these emotionally resonant, triumphant bulwarks that instantly exude testosterone. What man could not ball his fists and bang his head to the adrenaline inductive intro and verse riffing in "Victimized", or the choppier grooves permeating "Lies"? I've not met him.

As usual, Petersen lends credibility and effort to each and every vocal line, BAR NONE, throughout the whole 48 minutes of the experience. Crystalline clarity that few others in the field could emulate, in both his herniating mid range and the falsetto cries that have come to define the man by both his harshest critics and stalwart supporters. It's obvious the guy had a lot of fun carving these disturbed characters, both ghostlike and fleshly through the story, and though one might become lost without the physical assistance of the lyric booklet, they're just as amusing to listen to. The rhythm duo of Mikkey Dee (drums) and Hal Patino (bass) also deserve some credit, creating a flexible foundation for the guitars and vocals to waltz over, but I would say that the unsung hero on this album might just be the elusive Robert Falcao, whose keys have a more prominent role than the other full-lengths he contributed to, even if they are outdistanced by the axe-work.

Of course, Falcao also had his hands tied with some of the engineering and production work, in which he was joined here by the legendary Chris Tsangarides, who everyone knows from albums like Painkiller, Metal on Metal, and The Eternal Idol. Together with the band, they create this amazingly high budget feel to the record which surpasses its predecessors in terms of sheer polish, without becoming stale or plasticized. The level of reverb and general airiness of Conspiracy is a little less brash and saturated than "Them", and while I had no problem with either of those things to begin with, I think what manifests here moved the group in a more accessible direction for their expanding audience, while allowing the effects on the leads and melodies and the myriad vocal tracks to really shine without competing with the bottom end of the bass and rhythm guitars.

Could I possibly summon forth any complaints about this album, I would settle them on the fact that there is one song among the many that I found less than perfect, and that would be the lullabye-fronted "A Visit from the Dead". Don't get me wrong, it matches the aesthetic of its part on the story, and there are a number of great guitar licks in there, but where its neighbors just clobber me with incessant genius, this is the one piece I might gladly skip past if I were in a rush. The cover also seemed a little lazy. I realize there are few figures out there as iconic as Diamond when it comes to flashing his gums and paints for a photo shoot, but he had already done this for The Dark Sides EP and I would not have minded a little cover artwork. But really, this is an insignificant qualm since the shot here is beloved by so many, and it's not like the guy is pretending to be some sex symbol, he looks ghastly, bloodied and his eyes penetrate your soul almost as much as his pitch.

In the end, and forevermore, Conspiracy is easily one of the best of King Diamond's catalog and capitalizes in every way on its predecessor, even surpassing it by a slim margin in terms of song quality. Sleek and graceful, but explosive and muscular where needed, it's the epitome of a horror metal concept album in such a time that very few bands were attempting the feat. The composition level was riding its all time high, the song selection was versatile and loaded with more memorable leads and riffs than one could hope for in six other records of its niche, and it provided further evidence that, despite the shock rocker gimmicks and almost caricature nature of Petersen's vocals, this guy was no laughing matter. If forced to pick favorites among his records, I might slightly favor Abigail and The Eye to this record, since those felt the most effective in matching their stories with unforgettable atmosphere, but this is certainly nipping at their heels, almost close enough to pull an upset and snap the finish line ribbon itself.