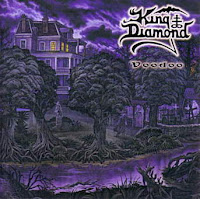 Voodoo was the first King Diamond album in history that i actually found myself not looking forward to, and the blame could be largely placed upon the shoulders of its pathetic predecessor The Graveyard. Thankfully, my apprehension wound up misplaced, because while it's certainly not one of the better recordings in the King's backlog, it at least returns to a stronger production sensibility and the songwriting is vastly superior to that 1996 tar-pit of creativity. Voodoo is muscular and atmospheric, the album that should have been the direct follow-up to The Spider's Lullabye; even if it lacks tracks that really stand out to me like "Killer" or "Eastmann's Curse", you could tell that the band was at least trying to retain that sense of shrill ghastliness and nocturnal grandeur that it mastered so many years prior.

The recurrent supernatural themes of this album reek of those found on "Them" and Conspiracy, only set in the context of a Mississippi River community in the 30s. Probably inspired by the classic film White Zombie, only not exactly due to the change in location and a slightly different plot. 'King' himself was not a character in this particular tale, but as usual those he scripts wear their personalities on their sleeves. Like 'Nurse Needle' in The Spider's Lullabye, here we have 'Salem' a practitioner of dark magic, who decides to side with his religion against a local rich family (whom he works for as a house servant) that wants to destroy the local voodoo grounds. Seriously, who could blame them? That shit is creepy, and Salem ends up justifying their hostilities and suspicion as the grisly events of the story play out. As usual, it's a simplistic story with a few twists and turns, the sort of light fare Diamond is always trying to squeeze into the confines of a single album, so one should not expect some literary, impressive narrative.

I didn't care for the little ditties wedged in between a few of the full-length songs, like "Unclean Spirits" which is more or less The Exorcist on a King Diamond record or the intro "Louisiana Darkness" which at least sets a theme and setting with the buzzing insects and river of gentle falsetto and tribal drumming. But there are some half-decent metal cuts here like "Loa House", which took me straight back to the years of "Them", or the interesting "One Down Two to Go", which surges between periods of calm and some savage riffing, grooves and acrobatic slices of lead-work. I can't cite Voodoo as being highly original, since most of the guitars still feel like echoes of finer years, with a few new notes re-arranged and a slightly bouncier overall veneer, but this is at least the King Diamond I knew and loved those many years stirring itself back to form.

It clearly sounds better than The Graveyard, because the guitars have some true power and depth to them, wisely disposing of the parched punch I had to endure there for nearly an hour. The rhythms don't involve a lot of incredible hooks, nor are the vocal lines particularly haunting or resonant with me these many years later, but the drums possess a heavier thunder here, possibly due to the acquisition of pounder John Luke Hebert who had played on a great Chastain record, For Those Who Dare in 1990 (and former Chastain vocalist Leather Leone's solo album Shock Waves the year before that). For bassist Christ Estes and guitarist Herb Simonsen, this would be the last studio effort with the King, and they turn in adequate enough performances that they can be forgiven for the dry spell two years earlier. I enjoyed the leads far more than The Graveyard, but then they don't exactly have the most compelling foundation of riffs to build upon.

All told, this is twice the album that it's predecessor was, and managed to curb the dread I was feeling for the band's future, but far from the first King Diamond album I'd reach for when I find myself in the mood for a supernatural falsetto drama. The voodoo angle is one the band was destined to explore, yet it doesn't leave a lasting taste thematically like an Abigail or The Eye. Nor does the music.