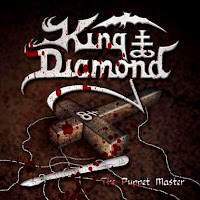 The Puppet Master is not a favorite of mine amongst the King Diamond canon, but by no means is it a dropping of the ball that they had, at long last picked up with Abigail II: The Revenge. If anything, this is a more richly produced album which suffers only because, despite its enormous sound quality, it doesn't have a hell of a lot of tunes which stand out in memory. Granted, Abigail II was not itself quite a match for the band's masterworks in their heydays of the 80s, but I felt there were a good 7-8 songs there that I would keep returning to, where The Puppet Master provides me with only about 3-4. Those particular choices are certainly memorable and belong on the short list of his best material beyond The Eye, but I often struggle to retain the rest of the album in my thoughts.

But gods, does this sound huge. Stylistically, it picks up straight on the ghostly vapor trails left behind by its predecessor: a re-envisioning of the band's 80s overtures with a lot of modern power to the guitars. It helps that, for the most part, this is the same lineup as the band used the year before, only with the added dimension of King's wife, Livia Zita contributing the female vocals. It's an admittedly predictable horror story here, about a pair of lovers who experience a puppet show in Hungary, only to then be turned themselves into helpless marionettes by the vile 'Puppet Master' himself. King once again introduces himself as a central character in the fable, and there are a few grisly details involving the eye sockets of characters that strike a nerve, but as usual this is not exactly the most frightening of narratives. That said, what I enjoyed most is just how well the actual songwriting captures the aesthetic of such murderous dolls, thanks to the creepy, percussive power/thrash rhythms invested into tunes like the excellent "Blood to Walk" or the dire melodies of "Emergencia".

The guitars are even louder than on Abigail II, and the level of riffing comparable, at least for the standout songs. Once again, Kim Petersen has defied the process of aging, his glittering pipes still capable of hitting the range he was exploring well over a decade before this. I give some credit that Livia's lines don't really feel like an intrusion into the mix, but they play out in a tune like "Emergencia" almost like a morbid ballet. I won't say that she's got the most memorable voice, but it sounds practiced and competent enough. It's just too easy to be overshadowed by the King himself, whose schizoid retching and screaming on a piece like "No More Me" are nearly as charismatic as anything he was producing during his prime. Rhythmically, it's also a strong effort, centered more around grooving rhythms than speed metal licks, the drums and bass quite focused on their task rather than deviating from the guitars' path; but once again this lurching, jeering sense of motion plays itself well with the narrative theme. The dolls really seem to stand up and dance around in the bloody ark of the lyrics.

If I've got any problem, it's merely that the riffs and atmosphere have been done to a far better degree in the past, and the melodies just don't seem to titillate the senses nearly as much as the old hits. This is one of those records which is so positively produced that you feel there is no help but to enjoy it, and yet after the curtains fall and the puppeteers have left the theater, I find it just doesn't stick with me. Songs like "Darkness", "Living Dead" and "Christmas" all have their moments, but I'd never actively seek them out unless I was dead set on experiencing The Puppet Master in the fullest. I was fortunate enough to get the limited edition with the DVD, which involves is King Diamond narrating scenes and videos from the story, but I can't say that it's any more effective than just reading the lyrics myself as I listen to the music and open my inner eyes to the settle and events (like I had to do for all the other albums). Still, it's a decent bonus, and in no way can I complain.

This album seemed to generate quite a lot of positive press and a strong fan reaction, which is no surprise thanks to the production and the obvious amount of love and care placed in its construction. That said, my own beaming response to the previous album precludes me from really getting all that excited, since I felt that was already the comeback I was waiting for, this didn't add a lot outside of meatier guitars and vocal levels. As for the contention I've read that this is somehow 'the best' of King Diamond's works, I must call utter bullshit. There are songs on Fatal Portrait, the first and weakest of the 80s hot streak, that I like more than all the content of The Puppet Master combined. But besides the fact that it didn't personally live up to the hype surrounding it, I will say that at least this album was no disappointment. I might not love it, or really listen to it all that often, but it was no letdown.