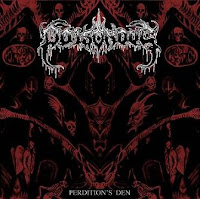 The expression 'old school' is a cliche that's been beaten to death many times over, myself not excluded from the practice; but few metal artists can it apply to so rigorously as Brazil's Poisonous, a band which eschews the past 20+ years of technicality and progression in the genre to produce some of the most authentically un-evolved brutality you're likely to hear south of the Panama Canal. I remember quite enjoying the group in their prior incarnation, Impetuous Rage, who flirted with a somewhat more complex aesthetic on their 2007 debut Inverted Redemption, but you could consider Poisonous a mild reinvention of their sound into something more primal and bare-boned in its execution.

Perdition's Den is certainly woven of a mildly 'cavernous' persuasion, but not so much that it emulates the droves of Incantation worship groups currently saturated the scene. You won't hear dark ambiance threaded through the metal songs (though there is plenty on the horror-themed intros and interludes), nor any severe excess of reverb on the vocals or guitars. Instead, this pays more of a direct tribute to the formative tones of Autopsy's Severed Survival or Mental Funeral, Death's Scream Bloody Gore or Leprosy, or Obituary's Slowly We Rot with perhaps a few nods to the Dutch forebears or their countrymen Sepultura back in their youth. Low end, viscera churning axes wrought from both feverish tremolo patterns and condensed walls of sluggish chords. Weighted chugs serve as ballast for the blunt guttural delivery of the vocal. Tense and tactile drumming which feels as raw as in the rehearsal space, and thick, swerving bass which oft sounds like a passive but curious ooze creeping along the listener's ear canals.

I mentioned in passing that the band incorporated some creepy interludes here. Despite the cheesy use of the pitch shifted vocals in "Demons" or the swelling nightmare of low pianos and distant ringing that is "From the Infernal Rift", these really help to break up the chugging and roiling density of their neighbors and help to curb some of the monotony the album might otherwise suffer from. I wouldn't say that the actual riffing patterns used in cuts like "Under the Blessing of Death" or "Worthless Christ" rivaled their influences in terms of sheer spookiness or notation, but regardless Poisonous bring the full, morbid package due to the consistent antiquity of the songwriting, the bassy depths of the production, and the steady threat level of the growl. Nothing too memorable in terms of its individual tracks, but they can certainly put you in a mood for ritual sacrifice and fiend summoning.

The Brazilians feels distinctly old and unforgiving, without playing too heavily on the nostalgic trends currently in rotation, and for this reason I'd give Perdition's Den an easy recommendation to fans of US acts like Funerus, Blaspherian or Cianide who place a similar emphasis on sincerity and simplicity. Though the record was originally released in 2010, it's gotten some new life through metalhit.com with fresh cover artwork and extra tracks, so check it out if your tastes are aligned to that crucial 1987-1990 era and those who would resurrect it.