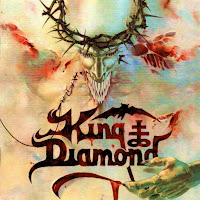 For the follow-up to Voodoo, King Diamond brought on a few new hard hitters, including Canadian axe wizard Glen Drover and another former Chastain/Leather alumni in bassist David Harbour who had worked with John Luke Herbert before. This was unquestionably a stronger lineup than the last one, though it would be sadly short-lived (Drover, Herbert and Harbour would all depart before Abigail II) since Diamond and LaRocque would start waxing nostalgic. House of God is also arguably one of the most interesting albums in terms of its concept, but I'd think of it not so much as a 'horror' record, but a conspiracy theory involving a bit of the supernatural, and by that I mean a shape shifting temptress, a Faustian bargain and the preserved body of Jesus Christ lying in the crypt of some old French church.

No, it's not scary, but really, were ANY of King Diamond's albums 'scary' unless you were the sort that jumped in his/her seat at the sight of Freddy Krueger? Perhaps in the right mood, by candlelight, Fatal Portrait might grant me a few shivers, but really, I have never turned to Petersen's lyrics and music for an A-great chillfest, instead I just really love the guy's music (for the most part). At least the narrative here feels relatively fresh territory for the King to explore, we needed a respite from the usual ghost story and he gave us one. I will say though that the creativity of House of God expands beyond its central concept to the actual music. I'm not sure if it was so much the new members, of if they just found Voodoo a bit too redolent of their past works, but the riffing set used for this Y2K doesn't feel as derivative. Not that House of God is all that well written or more than faintly memorable, or that the guitar progressions are that unusual for a mix of thrash/power metal, but at least this felt like a 'new' album.

In terms of its production, this is slightly less atmospheric than Voodoo but thicker and appreciably juicier than the dry spell that had been The Graveyard. A lot of clean, bold chugging sequences permeate cuts like "Black Devil" or "Help!!!", and Harbour has a copious tone which moves and grooves beneath the rhythm guitar. The man himself, King Diamond delivers a pretty anguished, straightforward performance that, while not exceeding any of his legendary displays of falsetto prowess in the late 80s, at least manages a fine balance of shrieking and mid-ranged, venomous narrative, nicely layered across a few tracks. There are some pitch shifted, goofy vocals in the intro "Upon the Cross" or "Black Devil" that are so ludicrous that they create an instant hurdle for anyone to care about the album's theme, but otherwise the atmospheric shorts like "Passage to Hell" or the ghoulish, gliding vocal/lead guitar arrangement in "Goodbye" feel pretty true to the form of past interludes. Organs and keys are still used occasionally but not a prominent feature of the core metal songs.

Most of the guitar lines are just downright simple, which isn't in itself a negative or unexpected trait, but sadly this translates into a fair degree of mediocrity here. You get some pedestrian chugging, some decent glazed leads, but nothing bordering on the chilling atmosphere that once dominated an album like Abigail or "Them". I laud that this doesn't seem like much of a rehash of safer times, but even the last album Voodoo had a better selection. As such, pitifully few of the songs here manifest anything bordering on a catchy procession of notes that demand constant replay. I've seen some of the tunes performed live, and they fit in well enough with the backlog, but there are no 'hits' on this album whatsoever, no individual cuts that I'd include on a King Diamond playlist on my iPod. Like both its predecessors, it just doesn't seem to age all that well, and I had to blow a fresh layer of dust off it before this listening/review.

It doesn't surprise me that this was never given a highly positive reception by the fan base, and if I'm not mistaken it even sold less than the two preceding albums. There are a couple good, screamed vocals lines and a few of the leads pop right out of the mix to sweeten the ear, but even taken in as a whole it feels like the band's songwriting was still in the same slump that it had experienced since about 1991. But ultimately, it's not a 'bad' album like The Graveyard, merely an average affair. It's never dull enough that would anger anyone, and in the background it provides an accessible, acceptable King Diamond experience, just not one that either evolves the boundary's of the bands style for the new century, or features the brilliant level of composition that thrust him into the naughty nightmares of shock metal fans in the 80s. The lyrics and the theme of House of God are actually quite mature and stirring when compared to any of the other albums, only mildly dweebie due to King's usual affection for character dialogue; they ask some interesting questions, but unfortunately the music does not.