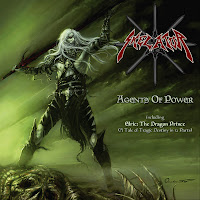 Skelator would not be the first band in the power metal spectrum to pay conceptual tribute to Michael Moorcock's most famous creation, the albino fantasy antihero Elric of Melnibone. However, I feel that their brand of working man's US speed and power, with aesthetically bears similarities to predecessors like Virgin Steele, Twisted Tower Dire, Manilla Road, Manowar and other domestic gods, is particularly suited to telling the tales of the Black Sword, since it instinctively carries this sense of nostalgia which can draw the listener back to that formative period of the earlier 80s when the works of Moorcock, Lieber, Howard and other lesser known fantasy staples in the shadow of Tolkien were enjoying a new burst of popularity with the onset of tabletop RPGs and now-antiquated video games.

Not that Agents of Power is devoted specifically to Elric, but about 75% of the album covers his saga while the first few songs deal with other fantasy settings like Dragonlance ("Gates of Thorbardin"). All delivered in a thick, chunky down to earth guitar tone which, admittedly is drawn from a pretty derivative arsenal of riffing patterns that aren't going to feel new for any long-term fans of traditional/power metal. There's a bit of Omen here, in addition to your signature Judas Priest patterns circa the 70s, some primitive Manowar power, and a pretty vibrant lead sensibility which is engaging enough where it erupts in a track like "Rhythm of the Chain" or the ascending, bouncy "Gates of Thorbardin". The real star of the show here, is singer Jason Conde-Houston whose caterwauling timbre has a sinister side to it reminiscent of John Cyriis (Agent Steel) or Midnight (Crimson Glory) in their prime; though he certainly paces himself like a Dickinson in the early to mid 80s and I hear smatterings of other esteemed forebears like Eric Adams, James Rivera and David Wayne throughout.

I really did enjoy the production of the album, earthen and deep enough to really let Conde-Houston's shrill melodic spikes stand forth, or the considerable number of noodling micro-solos; but I wouldn't say that it was blow for blow memorable in terms of the songwriting. There's enough variation throughout the album's hour length that you can really settle into it and not become excessively bored. There are narrative briefs strewn about the Elric sequence, like "Pulsing Cavern" or the Maiden-esque brief "The Young Kingdoms" which serve to splinter the more brooding, serious pieces, but in truth most of the tunes are well balanced and reined in (only two surpassing the 6 minute mark). I actually dug the first four pieces as much if not more than the conceptual chunk of the disc, so Skelator were wise in front-loading them, but there are a few gems deeper in the playlist, like "The Dark Tower" wherein the music and vocals channel Helstar, or "Rubble and Ash" with its unnerving and awesome spoken intro.

There's a bit less spit and polish than you'd find on albums by the Italians Domine, who also devote their lyrics heavily to Moorcock, but that's largely because Skelator lack that European anthem undertow. They keep the guitar progressions boxy and simplistic, the sort they could mete out in the rehearsal space with the same level of clarity they express in studio. Agents of Power is, if anything, a humble record which knows its limitations and never really pushes beyond them, but having said that, I still think it surpasses their sophomore Death to All Nations in terms of songwriting. Don't go into this expecting floods of Gamma Ray glitter or Dragonforce drama, this is a far more stripped and sincere approach that gets the former Californian act to the finish line without necessarily winning the race. Nothing groundbreaking or essential here, but it's got enough heart to win over the fantasy rock enthusiast or the crypto-USPM fanatic.