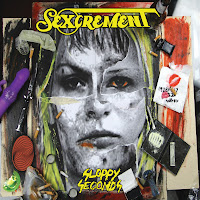 Sexcrement is a Massachusetts based act with roots in a lot of other local underground death metal past and present. Names like Terminally Your Aborted Ghost, Goratory, Porphyria and Dysentery might ring a bell if you've been kicking about the New England scene since the turn of the century, though none of these have made huge splashes abroad. However, this band is an entirely different entity in terms of aesthetic approach, a sort of light-hearted take on the porn and filth of the dregs of humanity delivered through a simpler, groove oriented take on the genre which draws upon everything from brutal death to slam to even a few groove metal riffs reminiscent of bands like Pantera.

Sloppy Seconds pretty much continues along the path of its predecessor, Genitales from the Porno Potty, but this time out I felt a contraction rather than an expansion of their sound, and a number of phoned in or played out riffs really dragged the experience below the median. Don't get me wrong: this is not a band to take itself so seriously, and if you truly enjoyed their debut then this will feel like a mission accomplished. They write simplistic and danceable death metal with lots of bouncing and dense palm mute chugs, bisected by occasional flights of surgical technicality. Their lewd sense of humor is actually somewhat unique. In a realm where bands compete with one another to come up with the most ghastly medical aberrations for song titles, a tune like "Well Hungover" or "Heart It Through the Rape Vine" seems like rather timid toilet humor that your little brother might concoct. In fact, Sexcrement's modus operandi seems to not take anything too far, but rather rein in the smut and violence to a near accessible level of clarity.

Unfortunately, though the samples introducing the songs might be pretty sick and 'inspiring', and they get a good rich guitar tone to drive the veritable mosh fest of the riffing, the actual construction of the guitars doesn't really do much but cycle through predictable patterns, while the gruff barks and snarls of the front man are hardly distinctive in their Carcass/Deicide duality. They throw a lot of riffs at you, dynamics that trend towards the middle pit pace more than sheer acceleration, but there are a number of tremolo picked rhythms and occasionally something that catches the ear. Sadly, there are points where the album feels like it slides from breakdown to breakdown with no interesting spins on the familiar we've heard so often in death metal, metalcore, 90s groove/thrash and so forth, no good leads, and nothing to really stand forth from the hordes of more visceral and exciting death metal that one can find on shores domestic and foreign. Simple is as simple does, and while cuts like "Trucker Bombed" and "Chemical Handcuffs" might work up a sweat for their friends and fans of the slam sect, they don't have much staying power.

That said, it would be foolish to write this off as a 'bad' album, when it isn't. They've got a fresh sound to the guitars that forces you to feel the chugging in your intestines, and the drums have a taut yet natural execution which is a good fit to the grooves. They're competent, yet never flashy. But I much preferred the more explosive, faster teases like the intro to "Assisted Living Lapdance" or the choppy playfulness of "Obestiality", and wish there were a lot more points where they would get even crazier. I wasn't exactly blown over by the riff set on Genitales, but I felt like the songs were marginally stronger and catchier than what I'm hearing in these, and I was ultimately left without too favorable an impression. I have always thought the band name was phenomenal, I only wish the writing was disgusting enough to do it some real justice.That said, if you'd be down for a somewhat less intense or crushing alternative to a Skinless, Dying Fetus or Devourment then you might give this a try.