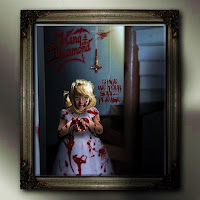 Infanticide is hardly a novel theme for a King Diamond record. Little ones have been maimed, molested and murdered by all manner of antagonists in his tales, so it feels like a 'return to the well' when once is considering the lyrical matters of the 12th full-length album Give Me Your Soul...Please. It is important to note, though, that Diamond is not taking 'the side' of these butchers and pedophiles, but is in fact a staunch and outspoken enemy to such violations. He tells these tales not from some morbid fascination, but with a clear intention to revolt the audience into taking a stronger stance themselves against such crimes against the innocent. A noble endeavor, to be sure, but some people might take it the wrong way. Don't.

I admit, I did not get off on the right foot with this record. It looks pretty stupid, and the title is awful, but within just a few songs I found that the musical content, itself nothing novel or spectacular, was coherent enough that it felt a natural successor to The Puppet Master. Same lineup, same polished, voluminous production standards, and no skimping on the effort, but no matter how hard I try, I can never shake the feeling that Give Me Your Soul...Please feels like some sidereal movement. An also-ran, so deep in the band's career that it serves no other purpose than to stay steady and keep the dream alive. Which is in itself a justification for existence, but hardly the sort to garner much praise. One example of how this stench permeates the album is just how easy it seems to pin where a lot of the riffs come from: "Never Ending Hill" clearly has a spin on Priest's "Painkiller" very early on. The intro to "Is Anybody Here?" seems like a mere paraphrasing of "Eastmann's Cure" from The Spider's Lullabye (though I dug the ensuing groove). The folksy melody inaugurating "Mirror, Mirror" also seems painfully familiar, as do many other individual guitar progressions.

That's not to say they're blatant ripoffs, but the album simply doesn't feel creative. It's more or less a direct doppelganger of the two prior works. The musicians have pulled no punches and spared no efforts, in particular the well structured lead sequences or the perkier percussion of the more thrash/power-metal oriented guitar progressions, but nowhere did I find that 'distinctive' stamp of brilliance that proudly glared at me from the spectral King Diamond works of years far gone. This is more a band, keeping on keeping on, proving it can run and gun well into its twilight years, and while I can't really fault Give Me Your Soul... solely on its lack of a unique identity among the group's many full-lengths, the music is decidedly unmemorable when compared even to something like The Puppet Master or Voodoo. From a technical perspective, there are no real complaints: no frost has formed on the limbs of LaRocque, Patino, or Wead. That I can assure you. But it sucks that, with all of their collective strengths, and Petersen's dreamlike, eerie falsetto, they couldn't come up with better.

A few cuts do tease some degree of quality, like "The Floating Head" once you get past some of the vapid if driving chug rhythms. Or "The Cellar", which does manifest some degree of haunting beauty as it surges from mid-paced, narrative riffs to thundering speed/power metal. But even these lack the unforgettable sort of vocal melody that you want to endlessly cycle from your own lungs if you've got the pitch. Perhaps this is indicative of 'too much of a good thing'. Perhaps the novelty of King Diamond has simply worn me out after so many timeless experiences with this group and his alma mater Mercyful Fate, but there's got to be some reason I can remember, as clear as day, almost every song the guy released from 1984-1992, but everything here evades me within hours of hearing it. Not that it's necessarily bad music, but it had some towering stairs to climb if it wanted to reach the next level, and instead it gave up and chose a smoke break...

And, speaking of smoke breaks, I really hope this isn't the last we'll hear of the band. I realize a year or so ago he had some heart complications, and has since been lying low aside from the occasional guest gig like he did with Metallica on a few dates. I'm crossing my fingers that he'll kick the habit, take a long and deserved break and then return to us with something stripped down to what made his music so valuable in the first place. He's well fucking earned it. Never mind the modernity and mediocrity manifest by an album like Give Me Your Soul...Please, let's recapture some of that evocative necromancy of Don't Break the Oath, or Fatal Portrait, or the first Abigail. Songs before style. Spine chilling melodies. Cross your fingers, folks.

I hope to god that Kind Diamond returns to form and releases something truly killer again, either eponymously or as Mercyful Fate. I'm hopeful since he's healthy again, he'll take up the guantlet thrown down by Ghost, etc., and show them how it's really done!!

Also, thanks for introducing me to KD and MF via your RYM lists. The first 9 have proven to be albums that I would take to the desert island and you deserve the credit, auto!!