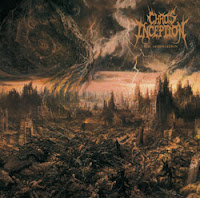 It surprises me that I could like an album primarily for its lead guitar sequences, but Chaos Inception's sophomore is so strewn with these infectious, incendiary whirlwinds that I can't help but admit they've got it down to a science. But don't mistake my fondness for this particular element of their sound as a condemnation towards the rest of the album, for in full, The Abrogation is one of the best post-Morbid Angel styled death metal efforts I've heard from the US, directly in line with the Alabama quartet's 2009 debut Collision with Oblivion in terms of quality. Even the color schemes of the two albums' artwork give off a similar impression, and yet the hostile vortex and devastated cityscape give an ample warning of the musical content...

You are about to have your temples collapsed and your wet brains popped out your eye sockets, following their aqueous vanguards to the pile of accumulating viscera at your feet. When I say Morbid Angel 'style', I'm referring more to the archetypal, blast heavy aesthetic the band immortalized through their debut album Altars of Madness and, of course, the later Covenant. The riffs rocket off like an avalanche of acrobatic artillery, fast as fuck passages of tremolo picked guitars interspersed with choppier, clinical thrashing riffs that sound and then saturated in frightful arpeggio flurries. Guitar progression after progression collides into one another, almost like fast forwarded tectonic plates crushed together in a waltz of seismic mayhem. It often feels that the album is so fucking packed with intensity that they just couldn't cram any more into its 31 minute duration, lest the Earth around them explode from the shock. Tunes like "Phalanx (The Tip of the Spear)", "Black Blood Vortex" and "Ancient Ways Prevail" are among the top picks, but there's not one of these nine which lags behind.

The drums are beyond human comprehension, and likely to turn a lot of heads which might have been negligent of the first album; but I once again have to mention the solos, these violent fits of beauty, which while hardly novel for the genre feel like lasers that explode from your mind to stretch across the dark universe. Each time Matt Barnes erupts into one of these segments, the music takes on an added level of depth which provides the perfect counterpoint to the standard musculature of the rhythm guitars. Chris White's vocals are nothing out of the ordinary for the genre, but delivered with a percussive aerobics that places them far belong mere ripoffs of the usual suspects like David Vincent, Frank Mullen or Corpsegrinder, whose influence they build upon. The bass is nearly as complex and bewildering as the other instruments, though the thuds were often a little difficult to navigate against the louder bite of the guitars.

If I had any single complaint about the album, it would only be that the songs are so consistent and often similar in nature that they oft seem to blend together, one pummeling into the next, but then the lyrical variations and the brevity of The Abrogation ensures that it never really wears out its welcome. For sure, though, Chaos Inception is proving once more that they're a force to be feared, a healthy hybrid of 90s extremity with a flair for the modern execution and intensity that you often hear from technical West Coast acts. Fans of Morbid Angel, Diabolic, Nile and Hate Eternal really ought to check out this band, but there's enough of an appeal here for nearly any brutal, accelerated death advocate. Destroy destroy destroy.

Their debut was phenomenal, and thank you for the review, because I still listen to it fairly regularly. I can't wait to pick this up!!