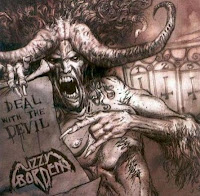 Regardless of how much I might have once anticipated a followup to the phenomenal albums Visual Lies and Master of Disguise, Lizzy Borden is most definitely a band I can 'excuse' for sitting out the 90s. They weren't entirely inactive that decade, but their studio streak was silenced and the group did little of anything. The entire glam meets shock rock aesthetic of the 80s had died down, only its elder statesmen forging on. 'Gothic' trailer trash icons like Marilyn Manson and masked nu-metal morons taking the reins over the misdirected youth of America, and let's face it, even without the image, Borden's broth of hard rock and traditional metal aesthetics was not in high demand in a world addicted to grunge, emo, British alt rock, gangsta rap and other trends of the time.

Granted, it was a bit of a shocker that Master of Disguise didn't blow up far wider than it did, especially on an audience that would prove so receptive to something like Guns 'n' Roses' double-album Use Your Illusion or the late 80s Alice Cooper records like Trash, but as always, the overwhelming majority of music fans are so passive and lazy that you need to repeatedly beat them in the face with something before they'll take any notice whatsoever. No MTV, no radio, no major label backing buzz: chances are, you were fucked. Eventually, cult reverence and nostalgia won out, metal once more rose from a banal cultural background and Lizzy Borden returned to their old home Metal Blade for another go at the rodeo. Deal With the Devil featured a fractured lineup, with only Lizzy and drummer Joey Scott Harges returning from the 80s lineup, alongside bassist Marten Andersson who had joined in the early 90s. Joey Vera of Armored Saint and the old bassist Mike Davis did the bass on a number of tunes, while numerous session guitarists provided the rhythm riffing and leads.

Deal With the Devil was the sort of 'reunion' comeback which felt as if half the time the band was just trying to catch up with where they left off (Master of Disguise), but it's not without a few new ideas. Sadly, the new ground being explored was very often an attempt to steer the band into an even more accessible package which might have appealed to hard rock fans in the late 80s/early 90s. Tunes like "(This Ain't) The Summer of Love" or the title track might have well been Motley Crue cuts, some lost Sunset Strip cruise anthem with which to guzzle the whiskey of regret. "Generation Landslide" wouldn't have been out of place on The Cult's Sonic Temple if not for the vocals, and "Believe" fed me some flashbacks to Queensrÿche's post-Mindcrime material like Empire, especially when Borden delivers his lower range vocals somewhat similar to those of Geoff Tate.

There were also a few tunes that tried to go with more of a modern 90s vibe, like the quasi industrial flow of "We Only Come Out at Night" with its brazen, enormous bass groove, or "The World is Mine" its familiar Pulp Fiction biblical quote intro and chanted, repetitive chorus sequence. To be honest, when I heard that Lizzy was coming out with a new record, I half expected it to sound like something out of the Slipknot or Marilyn Manson playbook, because who knows what these veterans had been following in their hiatus? I was honestly relieved that, for at least 50% of the album, it's a straight continuation of the 1987-89 style, with tunes like "Hell is For Heroes" and "Lovin' You is Murder" executed with all the finesse, melody and layered vocal tracking I used to love. I also dug the opener "There Will Be Blood", with a few 'Easter Egg' lyrics recalling "Council for the Cauldron" and "Flesheater" (metal bands love to do this on 'comeback' albums); and the exotic, Middle Eastern-flavored "Zanzibar" which is probably my single favorite here.

I remember experiencing some sense of fulfillment when I purchased this album, that Lizzy Borden hadn't completely fucked up everything that made them great in the first place, but I must admit to some diminishing returns as I have gone back to this occasionally for the past decade. Even at its best, the songs just do not live up to those on the first four full-lengths, and despite the level of variation heels more or less like repairing the links on a broken chain rather than forging it stronger. The lyrics are decent, and he production itself is quite good, with a brazen guitar tone and incredibly well balanced vocals, modern and updated as one would have hoped. Yet in the end, it's difficult to ignore the filler, and outside of a rare bout with "Zanzibar" or maybe "Hell is for Heroes" I don't visit it often. Not a terrible return after a decade of absence, but neither is it impressive.