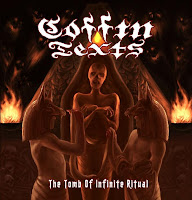 It's been a long time since last we heard from California's Coffin Texts. Not to say the members haven't been active elsewhere, but 12 years have passed since the debut Gods of Creation, Death & Afterlife and I'm sure many had written them off as a lost cause. Yet the swans are not yet in song, and from what I'm hearing on The Tomb of Infinite Ritual, the trio is just as intense and destructive as ever. Coffin Texts were (and remain) another of those bands focused on an Egyptology theme, alongside Necronomicon from Canada and Germans Apophis, all of which were outgunned and outdistanced by the esteemed Nile, but had their own approach to the songwriting and lyrics that might have expanded their audience were it not for the various hiccups and obstacles that they faced.

If I had to compare this sophomore directly to any one thing, it's more or less Altars of Madness on steroids. The acrobatic exchange of Richard Gonzalez' guitars with the dark brunt of Robert Cardenas' guttural vocal is highly reminiscent of Trey and David Vincent in the later 80s. You can hear a lot of the same contrasts in the atmosphere of the faster picked guitars to the darker growls. However, being that this is 2012, the drums hit even harder than Sandoval, there are numerous squealing, shifting and grooving embellishments derived from the ensuing decade of brutal death. Coffin Texts keep their compositions extremely busy, never giving the listener the opportunity to fall out of the rank mysticism of mummification and ancient warfare that their lyrics manifest. As old school as the riffs often seem, like the tremolo patterns, there is enough controlled chaos here to sate younger fans who demand a degree of technicality and aerobic. There are some slower, moody segments to the album like the closing moments of "The Sacred Eye" with their monolith chugging, or the lurching grooves deep in the run time of "Divination", but in general they like keeping the pace up.

Much of the 'Egypt' feel is kept strictly to the lyrics, the spooky if dry intro and the sparse use of backing synth sounds to provide enhanced atmosphere at particular moments. In this they remind me of Nile, who also heavily favor the metallic elements over the potential ethnic instrumentation and distraction. You won't feel like you're wandering through a bazaar, avoiding the probing eyes and weapons of the Pharaoh's guard, but rather having your organs liquified and removed from you prior to being embalmed, or having your ass kicked in a wrestling match with Anubis. The Tomb of Infinite Ritual relies heavily on the tension and aggression of its layered textures of guitars and the unending battery of Emilio Marquez, who has performed with Asesino, Brujeria, Sadistic Intent and Possessed to name a few, and it shows. The production is dark and rich, reminding me of several Pessimist records, everything audible despite the murk created by the mixture of gruff vocals and frenetic guitar progressions. Ultimately, though, there are just not enough bands in the States who play with this style, and I think despite their absence, Coffin Texts do a rather knockout job here. It's not an incredibly memorable album, perhaps, but ample proof that the sarcophagi have cracked and their aged occupants seek to once more exact tyranny upon their inferiors. Welcome back.
Verdict: Win [7.75/10]