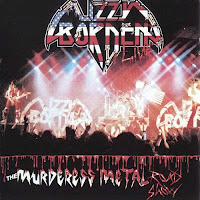 I would have thought the mid 80s a bit early in Lizzy Borden's career to release a live record, what with their second studio album still on the horizon; and yet the medium was quite an important one for the Californians, whose frizzed up looks weren't made just for their photo ops, but for prancing around the stage setting and entertaining an audience largely weaned on glamorous drunken cock rock at the clubs. Fortunately, The Murderess Metal Road Show curbed any trepidation I might have had, a thorough treatment which was issued on both VHS and audio formats with a fat play length of around 70 minutes, and wisely, oh so wisely, a few bonus studio treats to tide over the band's followers until fall of the same year, when the sophomore Menace to Society arrived.

I've never watched the actual video, an admitted travesty for one who has enjoyed the group this long, so my knowledge extends only to the audio version, which in of itself is quite satisfying. For one, this is not a pastiche pulled from an entire tour, but a single gig, which to me is always a more authentic experience in judging a group's capabilities in the live venue. They include the ENTIRETY of the Love You to Pieces album, so all of those favorites are present here and even a few that aren't, but the consistency of the writing there makes for one hell of a solid night. Staples like "Warfare" and "American Metal" sound about as good as you'd expect, with a good balance of drums and vocals, though occasionally the flightiness of the guitar melodies takes on too much of a life of its own, breaking away from the rhythmic mold beneath, and the bass can often get lost. Lizzy sounds as sharp as the studio recordings, without ever straining himself, and in general I'd say the bound is spot on, the album exponentially better when experienced at a higher volume.

Beyond that material, they've also worked the originals from the Give 'Em the Axe EP into the set, and they replaced their Rainbow cover here with a version of Paul McCartney's "Live And Let Die", which is to me, the de facto rendition of this tune on any metal or hard rock release. Naturally, it irked me to no end when Guns 'n' Roses came along and exploded with their version, not because that was crap, but because I really thought the drama of Lizzy's timbre was the perfect fit with its screaming, while the little melodic breaks of the upbeat guitars totally pop out of the amps, not to mention the trebled thrust of the bass and the atmospheric transitions. I can live without the clamor of the closing 'finale' medley, but it wasn't and is still not uncommon for a band to end a gig with some further crowd tuning, so it's pretty sincere to leave it on the recording. All in all, a truly fulfilling set for any and all fans of the formative years of the band, and a great introduction for their newer guitarist Alex Nelson who seamlessly replaced Tony Matuzak.

The studio tunes are also quite nice, though I can see why the band might have been hesitant to include them on Menace to Society, as they're slightly less catchy than much of the sophomore. "Dead Serious" is a mix of classy melodic speed licks with loads of leads, but I didn't find Borden's vocal progressions all that memorable, even when he gets lower pitched and creepy over the bass lines in the bridge (a good shriek follows, though)."(Wake Up) Time to Die" is potentially more ambitious, over 6 minutes with loads of King Diamond-like screaming and a triplet canter redolent of classic Iron Maiden, and this is slightly sticker than "Dead Serious" what with the gang shouts and variation. But the best thing about the song is that the lyrics are based on Blade Runner, from the replicates' point of view, so how cool is that?

Ultimately, you come away from The Murderess Metal Road Show knowing that the band and label put their all into its conception. It might not be a top shelf live record when compared to the bigger names in its class, but the commitment to such a complete set and then the bonus material ensures that it never comes across as some premature, commercial ejaculate attempting to capitalize on the hot streak of a fresh new artist. Worth the time and coin if you're into the band's 80s fare, or just seeking out glistening US power or speed from the period in its birthday suit.