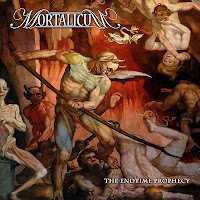 Sweden has a history of producing these heavy/doom metal throwbacks which use the clean, melodic vocal arrangements. Not that 'throwback' is meant as an insult, per se, since in many ways the 90s and 21st century have seen the genre expand in its array of possibilities. But I mention the vocals in the case of Mortalicum's sophomore The Endtime Prophecy because they proved a hindrance to my ultimate enjoyment of the album, and what otherwise might have been a decent Iommi-rooted riff fest was rendered somewhat average despite the obvious literacy the band has for the 70s and 80s sounds of Black Sabbath, Deep Purple and so forth.

Now, before anyone gets angry, let me state that I don't actually think Henrik Högl has a bad voice at all. He hits his notes well enough, his phrasing is fine, it's just that I don't find a lot of character in it that I want attached to this style. Comparable Swedish singers like JB Christoffersson (Grand Magus, Spiritual Beggars) or Christian Lindersson (Lord Vicar, Count Raven) have a lot more intricacy, or a haunting nature to their pipes that I was really missing as I listened through this. In fact, I'd say that Henrik reminded me a lot of multi-instrumentalist/producer Dan Swanö when he's doing his clean tones in bands like Nightingale, and it just doesn't lend itself much of a heavy personality to the music. So, the vocals of The Endtime Prophecy aren't quite hack or talentless, they just don't further the experience with the crushing edge I seek out of doom metal, even that which is as accessible as Mortalicum in general.

As for its production, the album is good and loud with clear guitars and bumping bass-lines that definitely land it at that crossroads between modern tone and 70s aesthetics. Groups like Spiritual Beggars and Terra Firma make for apt comparisons in the songs' dedication to grooves and straight, classic metal, but I also heard some clear influence via Trouble ("Dark Night") or The Obsessed ("Embracing Our Doom"). I rather like the subtle atmospheric touches throughout the record like the distant choirs that inaugurate "Embracing..." or the acoustic outro "The End", in which Henrik's vocals actually seem to match up far better with the music, but these only represent a minority of moments. The remainder of the album consists of pure, driving hard rock/doom played at mid to slightly slower paces, with only a handful of guitar patterns that really stand out. It's hardly ominous, soul drudging or particularly aggressive in nature, but neither was it incompetent or poorly written.