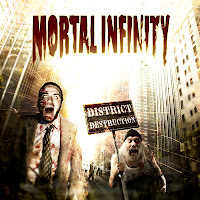 The first thing I noticed as I was listening through Mortal Infinity's first full-length album District Destruction: for a German thrash band, I would not say that they dwell upon a decidedly Germanic sound. You won't hear the acidic constipation of Schmier's vocals, the alcoholic pummeling of a Tankard, or the riffing complexity inherent in the better records by a band like Kreator at their peak. No, this quintet has a style far more akin to the West Coast US thrashers like Exodus or Vio-Lence around the year 1990 and records like Impact is Imminent and Oppressing the Masses, with a pinch of bands like Defiance, Heathen, Anthrax and Metallica added as seasoning.

Probably the closest comparison would be Exodus, though, or their coattail bands like Bonded By Blood, Warbringer and so forth. Part of this is that Marc Doblinger's vocals feel like a composite of Steve Sousa, Paul Baloff and Rob Dukes, but also the level of variation and meatiness to the riffing has that mid-paced, central focus that those flesh-pleasure peddling, piranha obsessed maniacs have been meting out since they broke out on MTV with songs like "Toxic Waltz". This is not necessarily a bad thing, because unlike Exodus on their most recent full-lengths, Mortal Infinity actually knows how to have fun with the guitar progressions, and the result is an enthusiastic, if somewhat derivative record with lots of guitar work to band your heads. The leads, while not entirely memorable, are exciting and transitional, the gang shouts (where they appear) lend a sense of street vigilante justice as intended. Doblinger isn't afraid to change it up and bark out a pure death growl (like the end of "AT Dawn of Death") and I found that the Germans were good at pacing themselves so that no two cuts sound quite the same (individual riffs are similar, but the overall arcs remain distinct).

The guitars have this copious, modern punch to them that would thrill devotees of the other groups I mentioned above, or maybe the modern Artillery outings since this Mortal Infinity occasionally threads in a few thrash melodies that help counterbalance the rather simple mosh rhythms prevalent in a track like "Wake of Devastation" or "Retribution". That said, I didn't find a lot of the music here to be all that innovative or, really, compelling. Without question, you can bang your head to a bunch of the progressions. The Germans truly love that mid-paced Exodus aesthetic which is sure to get any gang of smelly young thrashers whipped up in a fury, but I never felt like there was an innate cruelty or cutting edge which I almost always require in my thrash. I do appreciate that Mortal Infinity plays against type, more Bay Area than Sodom, and this surely must help distinguish them in their home territory, but ultimately I didn't get more than a passing enjoyment from the songs on this. It's not bad, though, and fans of the albums Shovel Headed Kill Machine, Tempo of the Damned, War Without End or the Bonded by Blood debut Feed the Beast might find a kindred spirit here, so they should check it out.