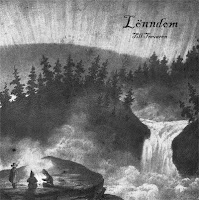 The Lönndom sophomore Viddernas tolv kapitel was a definite example of 'what you see, what you get'. The natural landscapes photographed for the booklet, the two acoustic guitars at rest against a tree trunk; the idea of self-evaluation and realization through solitude in the wilderness that birthed our civilization providing the deeper level needed to provide an emotional resonance within the listener. A work of pure, overcast folk music with an appeal for those who could listen past its very basic aesthetics to the heart of its existence. Of course, as the members have repeatedly stated, this is not a project restricted by the boundaries of any one genre, and so it comes as no surprise that this latest EP, Till Trevaren, takes yet another spin in direction.

The acoustic guitars and numbing, deep vocals are still central to the sound of these three tracks, but in a way the band has taken a 90-degree (not a full 180) back to the first album, with a darker edge. You can hear a bit of minimal distortion on the picking of "Bårgå", and synthesizers have been added to create a brooding, solemn  backdrop of choirs, and there are many whispers and haunted, ghostlike personas adrift through the miasma of despair and darkness that they create. In addition, the band makes a use of simple, effective percussion through the first proper track, "I Fallet" which combined with the guitar patterns creates a similar atmosphere to some of the material Graav recorded as LIK. I must admit, though, that I rather prefer this approach to its predecessor, simply because there is more going on here.Viddernas tolv kapitel was quite effective in its drier audio clime and rustic meditations, but Till Trevaren might as well be the sound of a world ending, a forest ablaze at dawn as the nightscape is exiled by the waking sun. The music is spectral and involved, cascades of hypnotic guitars relished in a broth of both brazen and subtle effects and voices.

My only complaint would be that I didn't feel the need for the spoken intro and creaking door/spoken outro on the CD (the version I'm listening to). I'm not sure of their narrative value sandwiching the proper songs, but they felt a bit too empty, slice of life and useless. The three central compositions, though, are to date the best I've heard from Lönndom. Perhaps not as heavy as the debut Fälen Från Norr, and certainly not metallic, but truly they work at the back of your mind, creating sensations both lush and gnawing as if you were trapped in some evening forest, confused, the canopy revealing only faint hints of alien starlight. 15 minutes of the cold and eerie, without feeling barren like some of the pieces from the prior album. Well worth a listen if you're a fan of darker folk, atmospheric post-black metal or anything that involves a few points of glimmering light against the greater, all consuming blackness of the unknown.