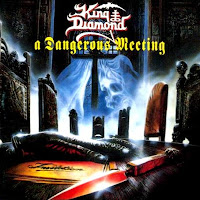 While you'd expect a career like King Diamond's to be cluttered up with scads of cashed in compilation appearances, this has thankfully not been the case. There are a few exceptions, like the worthless Best of King Diamond that Roadrunner would release in 2003, one of several cut and paste efforts in the series that particular label would discharge on the listening public like drainage from a waste station. But rather than dwell on the predictable details and rating of such sewage in my coverage of the discography, I'll instead pay a little visit to the one collection that stands to mind. Not because A Dangerous Meeting is itself much of a value, but because it was somewhat of an unusual, unique release of this type.

The main reason being that, while heavily marketed as a 'King Diamond' release, this is actually a split covering material from both that band and his reunited alma mater Mercyful Fate. I can't really imagine why the label thought this was a great idea, however, on a fundamental level it makes sense to combine the two if you're seeking to give a newer audience just a glimpse of Kim Petersen's history. The styles of the bands are obviously comparable; Diamond's shrill meandering narrative the key, binding component, but musically they were not far off one another. Denner and Shermann might have used a more broadside, muscular tone to their riffing where LaRocque has a lot more flash, speed and airiness to his approach. Mercyful Fate kept the lyrics distinct, usually to each individual track, where King Diamond is far more conceptual minded. Otherwise, though, the two brands feature many of the same characteristics, after all it's not like Petersen was trying to 'escape' his years with Fate (he'd return to them and keep both running simultaneously).

At some level, though, you have to understand that Roadrunner was still trying to squeeze money out of the acts after Diamond had swapped over to Metal Blade. The 1990 effort In Concert '87: Abigail was one such case (albeit a contractual closer), but A Dangerous Meeting is a far more transparent example of giving something for nothing. It functions in that it's drawing upon what is unquestionably the best material that either of the acts had put out, and useful to a new listener as a sort of 'sampler', but anyone will tell you that albums like Don't Breath the Oath, Fatal Portrait, Abigail, "Them", Conspiracy, and The Eye are all mandatory whether you're into the distinct, melodic speed/heavy metal Petersen and his compatriots create or you worship the band as a sort of champion of proto-black/occult metal aesthetics. And at its core, A Dangerous Meeting is a mere 'bare bones' selection of cuts from such impeccable masterworks.

Very strange that both logos aren't featured prominently on the front of the package, almost as if they wanted to market it just for the group that was 'hot' at the moment. I do like Andreas Marschall's cover art, which is instantly recognizable to fans of his work with Running Wild and Blind Guardian, and I also admire the picture of 'pirate' Petersen, in full makeup, manning the helm of some ghost ship in the booklet. As for the actual audio content, the tracks follow a chronological order, beginning with the Mercyful Fate cuts "Doomed by the Living Dead" and "A Corpse Without a Soul". The two groups aren't exactly represented equally, since King Diamond had more albums available, but close enough. The 'second' side, or the solo band tracks rather, are thicker on Fatal Portrait and Abigail than the more recent albums for the time, some of which are only given a meager presence with just "Welcome Home", "Sleepless Nights" and "Eye of the Witch", all formidable in their own right, but those records are just so damned good...where do you start?

It's this skimpy selection which ultimately rendered A Dangerous Meeting worthless to me, as someone who already owned the constituent albums and loved them to tears, but there's also a lack of rare and unreleased material. "No Presents for Christmas" is on the disc, but by today you find the song on a number of CD re-issues so it doesn't hold much importance. All the songs here are great, and it wouldn't have been a bad find for a dollar or two in some random used bin in 1992, at least for those seeking exposure to Mercyful Fate retroactively for the first time (their albums were a bit scarce then), but in the end the King Diamond tunes are just so much better experienced in the full narrative of their respective homes, and Don't Break the Oath is positively essential. A curious collection thanks to its split identity, and maybe something collectors might covet (though, which numerous re-issues I'm not sure how rare it is), but personally I find its pretty face is not good for much but collecting dust in recent years, and its best avoided. As compelling as sticking your chubby digits into some antique rotary phone when your cell is sitting in your coat pocket with a clear signal.