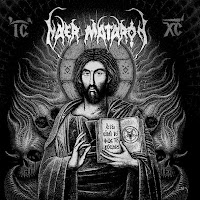 As a tease towards their forthcoming, sixth full-length album ΖΗΤΩ Ο ΘΑΝΑΤΟΣ, Greek ghouls Naer Mataron have unleashed this limited two track EP I Am the Light of the World, with a rather ironic cover and title if you've followed the bands incessant, scathing blasphemies to date. What I like is that this recording will actually retain some value once the album drops, as I'm looking over the track list it seems neither of these particular pieces will appear there (I can't translate the B-side title as of yet), so you are not only getting a collector's item, but one with some exclusivity. The idea here is pretty simple: the A-side features a metallic track, and the B-side a dark ambient piece, to which no doubt the group's Swedish keyboard player Nordvargr had his hands in heavily.

After an ambient intro with an almost electronic feeling beat, Warhead just blasts the goddamn heads off his drums as "A Secular Pursuit of Coffins" erupts (love the title). Anyone familiar with the stripped down, seething intensity of the band's 2008 album Praetorians will find that they've not skipped a beat here, this is more or less the same sort of level blast black with backing synthesizers and Vicotnik's grimy rasps providing a manic, sacrilegious slather. I did find the bridge and finale of this track to be a bit more curious than the rest, for all the schizoid, varied vocals laid in over a spurious black/thrash rhythm and its following threads of apocalyptic tremolo picking; but that said, it didn't entirely grab my attention.

On the other hand (and other side), the 7-minute ambient structure "ΕΓΩ ΕΙΜΙ ΤΟ ΦΩΣ ΤΟΥ ΚΟΣΜΟΥ" was quite absorbing, first born of brooding, simple tones and then applying samples of deep percussion, slight patters of what I guess must be rain (or blood), and some ominous chants. Nothing you haven't heard before if you're into the more ritualistic side of this musical niche, but impressive and haunting to use as background noise for some decadent act, or morbid self-reflection. The production on both tunes is kept really raw here, the metal piece sounding like they barely touched it, the distortion really dry and forceful. I'm not sure if that's a sign of what's to come with the full-length, of if they'll go for something more heavily polished, but it's not unusual considering a few of their past works. Ultimately, this is a decent EP to snag if a diehard follower for the group, just keep in mind that they don't play with the usual Greek slow to mid paced atmosphere: these guys blast, rip and tear in a very traditional, but incendiary Scandinavian sense.