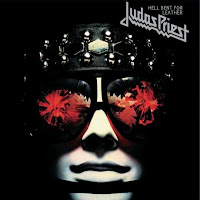 That Judas Priest could follow up a masterpiece like Stained Class with another great album so quickly was nothing short of a miracle, so I can probably forgive this 1978 successor if it does possess a marginally higher ratio of filler to the truly captivating material. By this time they had proven to be one of the most productive and consistent acts in the hard rock spectrum, destroying peers like Black Sabbath who were starting to dive in quality around this time, and continuing to expand the number of unforgettable songs they could fuse into their existing live sets by at least 3-4 on this very disc. For once, also, we Americans didn't get the short end of the stick: we got the version with the better title, not to mention the Fleetwood Mac cover. Yeah, yeah, fuck you, across-the-ponders.

I kid, of course, but though Killing Machine was a decent and extreme cliche for a metal record in the 70s, Hell Bent for Leather is simply put one of the best album brands I've ever seen among the tens of thousands in memory. However, either is a fitting label for the amount of aggression Priest have put into this record, the primary characteristic which differentiates it from its direct predecessor. Stylistically, there's not much of a gulf between the two, but the chords hit a lot harder, the heavier songs seem a lot more gnarly and vicious. One of the reasons for this is Halford's delivery, which on a tune like "Hell Bent for Leather" or "Take On the World" was downright nasty as he focused more on placing a gritty, barbaric edge to his lower and mid ranged. In fact, the screams don't really define his presence on this album like they did on Stained Class: truly, they still existed, but there is admittedly more variety in general with this album. Not that the vocals are better, necessarily, but it's good to know that Rob had no intention of discontinuing his growth.

I always caught a vibe of an almost science fiction, apocalyptic undercurrent to this record which likely stems from the tapping/effects used in tunes like "Burnin 'Up" or the title track, but really the album seems to travel all over the place. "Take on the World" could be viewed as a progenitor to the whole Manowar, muscle metal trend, since lyrically and musically the New Yorkers have spent over half their career simulating it (even the vocals seem like they had a huge influence on Joey DeMaio). The anthem-esque shouts of the vocal harmonies, the simple cadence of the war drums, and the simple chord structure. They do a huge Zeppelin groove in "Evil Fantasies", an almost KISS-like swagger to "Killing Machine", and a further, bluesy boogie to "Rock Forever" with wild, almost conversational vocals in the verse that burst into incredible screams and chorus harmonies. There's even a straight up, psychedelic/prog rock ballad in "Before the Dawn", which while admittedly is one of the least interesting or impressive on the album, shows that they've still got that same dynamic range they did years earlier on the debut.

But none of those songs are the best here, and in fact a number of them settle into the 'above average' range which ensured you wouldn't be seeing them on a whole lotta set lists. There are four in particular which shine brighter than the remainder. "Delivering the Goods" flexes a little of Glenn Tipton's whammy wanking and tapping as it drives from a memorable, saturated blues metal lick into a total bad ass (though obvious) chorus. "Running Wild" is a prototype power/heavy metal song that even bands like Iron Maiden would emulate (in the central riff), not to mention that, like "Exciter" on the previous album, would transfer over to provide the musical inspiration and moniker of another legendary metal outfit. "Evening Star" has a gorgeous intro with clean guitars that sounds like something The Cult would pull, but explodes into a friendly but truly catchy chorus. And last but not least, one of the finest rock-to-metal transformations in history in the band's cover of "Green Manalishi (with the Two-Pronged Crown)", so good that I feel it surpasses the original Fleetwood Mac version. Pure, mid-gait fuel injection rock & roll under a wailin', bluesy salsa with Les Binks riding that hi-hat for all it's worth.

Ultimately, this is not the crown jewel in the Judas Priest legacy, but it's got enough value that I still find myself listening decades down the line, even through its entirety. The pacing of the record is pretty sweet, but there are only a few points at which it creates that same level of breathless exhilaration that I felt from Sin After Sin or Stained Class. The lyrics are marginally more generic, creating a biker/party atmosphere that lacks the same depth, and it almost seems as if they were providing a blue collar alternative to their more heady material. That said, when it does shine, we're talking 'greatest hits' good for the songs I mentioned in that last 'graph, and the iconic cover image and status as the Les Binks 'swansong' with Priest ensure that it belongs in your collection alongside the more refined ambitions of its elder '78 sibling.