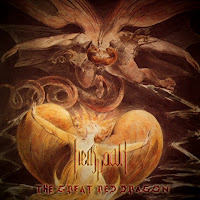 After enduring a century of warfare, political oppression, and bad ethnic humor from the rest of us, Poland has channeled its internal conflict and strife into what must be one of the deepest, most impressive death metal subcultures the world over. Only Sweden and the USA could really match it. When you can go two, maybe three tiers deep in this scene and find albums like The Great Red Dragon awaiting you, it becomes obvious that there must be something in the water there, and while Hellspawn might not bring anything appreciably new or different to the butcher block, their competent execution of the genre's tropes proves ably brutal and engaging enough to render the sophomore a success.

I love the huge, boxy guitar tone which just explodes out of my headset here, festooned in frivolous, zipping and bloody leads that help counterbalance the lower end ballast of the composition. Structurally, they possess a huge and similar tone to peers like Vader or Behemoth, and by this I mean they tend to drawn upon the earlier influences of groups like Morbid Angel and Deicide with a mix of blasted and grooved elements and an often dual-layered vocal attack which features gutturals and snarls. The primary, growled vocals definitely seem like a mixture of David Vincent and Martin van Drunen, which is quite corpulent and effective above the mixture of death, black and thrash aesthetics in the riffing. I enjoy the band's use of flooded, dissonant melodic passages like you'll hear in "Word Becomes Flesh", and they keep a lot of their tracks reined in well under 3 minutes, so they just burst right into existence, clobber you with some skill and then vanish off into the nether.

The Great Red Dragon is a pretty sweet sounding record, with that aforementioned guitar sound, the clarity of the drums and vocals and, surprisingly, a nice thick bass tone which anchors it all into a darker, foreboding space. Many bands spend whole careers concocting such a balance, yet Hellspawn have done it in just two full-length records. The only caveat here is that, while I appreciate the band's infernal level of energy, and the fact that they keep the tunes tense, brief and incendiary, nothing ever feels quite that unique or memorable. This is a well-rounded effort, mind you, and few songs feel precisely the same, plus it has the benefit of arriving and departing in under 28 minutes, and some well written, blasphemous lyrics, but I wouldn't call it infectious. That said, fans of classic 90s brutality like the earlier efforts of Vader or Hate, or Morbid Angel circa Covenant will likely find it a formidable listen.

Verdict: Win [7/10] (to bind them with diabolical breath)