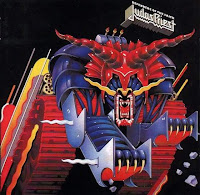 Look! Up in the sky! Is it a cat? Is it a tank? Is it a cat-tank? A battle-cat? A cattle-tank? In any case, we've gone from mecha-avian to mecha-feline with Doug Johnson's second cover for Judas Priest, but this predatory juggernaut mascot is strangely appropriate for what was one of the band's heaviest records of the 80s, one I might have dubbed Painkiller, Jr. if Ram It Down were not slightly more aggressive, enough to steal that retroactive title away. Certainly this is a more ballistic effort than its predecessor Screaming for Vengeance, and even though it lacks a true breakout hit at the level of "You've Got Another Thing Comin'", it's pound for pound competitive in terms of quality for much of its playtime, disintegrating only when you've gotten pretty far in the track list.

By 1983-84, the rest of the metal world was starting to catch up with Judas Priest. In England alone, you had Iron Maiden riding on the success of albums like Number of the Beast and Piece of Mind, while Def Leppard was exploding with Pyromania, and the lesser known Venom had by this point forced and soiled the boundaries of the traditional NWOBHM. Across the pond, American bands were reaching new extremes as the thrash and speed/thrash generation was just then emerging through Slayer and Metallica. By contrast, a group like Priest was, frankly, starting to feel old. Or rather, they would have, had they churned out another Point of Entry right in the middle of the mass evolution taking place. Fortunately, Halford and crew managed to stave off any notion of irrelevance with a pair of fine albums, first Screaming for Vengeance and then the Defenders of the Faith, the latter of which proved they had the muscle to go the distance, and that there was no known limit to which you could push Rob's lungs and the syncopated headbanging of the ax men.

The first seven tracks on this album completely destroy, with pure power metal pacers like "Jawbreaker" and "Eat Me Alive" highlighting just how rich and lethal Rob's vocal lines had become. The guitar tones fucking crush here, meaner and fatter than they had been on Screaming for Vengeance but just as resonant. Of special note on the album are the leads, which are in my opinion among the best of the band's career. In "The Sentinel", "Some Heads Are Gonna Roll" and "Jawbreaker", they really let themselves dash all over the fretboards, whammy bars and all, with the sort of excess you'd expect out of a guitar hero like E. Van Halen. The dual melodies pop along to the beats, the rhythm tone is impenetrable. Dave Holland had gelled into a pure cipher of thunder. The slight use of atmospheric synthesized effects here like the intro to "Love Bites" is tasteful rather than out of control (as is often the case with the following album Turbo). What's more, just about every riff on the album up to this point, while often reminiscent of others they'd written in the past, is perfectly placed into a verse/chorus structure and immediately memorable.

Then, about the time we arrive at "Night Comes Down", the storm starts to subside. Not because this is a slower, near power ballad, because it's still pretty atmospheric and has a nice build into the chorus with some heavy riffs, but just because those leading up to it had been so much damned fun. "Heavy Duty", with its Queen-like steady rock beat and generic riffing sequence fares far worse, and I could completely do without the afterthought/outro "Defenders of the Faith" in which they just repeat the album title ad infinitum. Had Judas Priest clipped these last 8 or so minutes and included one more bridge burner, I'd likely rank this above Screaming for Vengeance and possibly up there with Stained Class in quality, but alas I can't ignore how the album just goes limp.

Either way, Defenders is still a ripper of a record that begs a question: why, after such a pounding as this, would they suddenly decide to drift oft into the more mainstream/electrified overtures of Turbo before Ram It Down (considering they were supposed to be a double album at first)? Granted, I still enjoy that album to a degree, but couldn't they hear the spark of something so intense here? They'd already given us the hard rocker albums like British Steel and Point of Entry, so even in my youth I was hoping they'd take the material on Defenders and take even further. Heavier. After all I was starting to get into the faster and more aggressive metal around this time where I could sneak dubs of it off older kids whose parents wouldn't ground them for buying the tapes (I was like 10, forgive me). Ram It Down would have been a far more natural progression from this, though I admit the songs there aren't quite this amazing. Alas, it would take until 1990 to get exactly what I wanted of Judas Priest, but get it I would. At last.

Oh my god this album rules!! Thanks for the Judas Priest reviews auto. These reviews gave me the will to finally checkout Judas Priest, which MTV had completely turned me off of with their constant mockery of "Breaking The Law". Turns out that MTV was completely staffed with asshats, and Judas Priest rules the earth!!