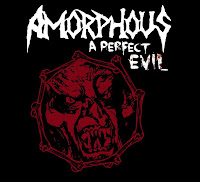 Though the cover to their sophomore album A Perfect Evil might not look like much, Amorphous have a fairly fresh sound about them that I find dissimilar to their Polish peers in many regards. They retain the strong songwriting aesthetics of their countrymen, but where bands like Vader and Behemoth implement a lot of over the top, grandiose overtures of composition which flex both their arrangement skills and top of the line production capabilities, Amorphous have a more stripped down approach which alternates between solid, simple grooves, thrashing breakouts, a clear death/grind lineage and even streaks of progressive and melodic riffing that really help round out the material.

In fact, I wouldn't say a comparison to late 90s Napalm Death or the younger Coldworker would be out of the question, albeit a little more primal and tending to stick towards mid paced compositions. There's a dark and urban atmosphere created through the union of the pummeling drums and dense riffs, and the vocals are shared between a gruff, Barney Green-like timbre and a slightly less pulverizing snarl. What I found the most remarkable about this record, though, is the ability to be chugging along in a piece like "Deception... lie... forgiveness" and then, deep into the bridge, explode into this beautiful lead that seems more appropriate for a melodic death metal act. Honestly, the solos woven throughout the entirety of the record are all exemplary, well constructed things that help bind together the varied elements of the band's rhythmic identity without every lapsing into wanking self-indulgence. Amorphous also quite great at implementing these pure thrash rhythms, like the intro to "My Revenge" which lead me to wonder how good they might be if they ventured further down that corridor of riffing speculation.

All told, there are still plenty of punishing low end, grinding sequences here to sate those who find my earlier description perplexing. Amorphous deal in anger and aggression foremost, they just know how to dress it up in the trappings that render it, well, more 'musical' than you might expect. The result really gives this total package, seasoned sounding album which makes sense for a group of guys that have been around since the early 90s (though their studio output seems only to have taken shape in the past 6-7 years). Perhaps there is nothing truly innovative about the Poles' music, but it shows a lot of maturity and restraint while leveling the listener with nearly every balance of groove and melody that manifests. I won't say that the tracks are at the level of brain searing intensity and catchy note progressions that ensure their immortality, but the excellent, clear production and versatile songwriting ensures that A Perfect Evil remains fun for a number of spins, and I quite surprised considering I hadn't heard the band before.