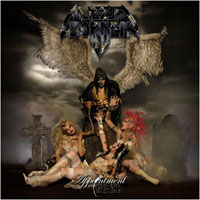 With the band reformed, and Deal With the Devil was released, Lizzy Borden had begun to gig again, and update its 'look' from the frizzy and ridiculous glam overtures of the 80s to a more face painted, menacing variety (still heavy on the U S of A colors) that felt somewhat current. But unfortunately the band's Mk. II momentum was ground to a halt when Alex Nelson, the band's live guitarist who appeared on a number of the 80s recordings like Menace to Society and The Murderess Metal Road Show, was lost to a car accident in 2004. Understandably, the tragedy wore the band's resolve thin, and they dissembled for a few years before inevitably deciding to press on. So, once more, we had a more than reasonable reason for a gap between studio material, but I'm happy to report that, when Lizzy finally released Appointment With Death along with axe slinger Ira Black (who played in Heathen and Vicious Rumors for a few years), it proved worth the wait.

No, this is not greatness the likes of which I attribute to a Visual Lies or Master of Disguise, but at least this time out, the Californian quartet wasn't out to fuck around and dip their toes into other pastures, a procedure which muddled and infected a sizable chunk of Deal With the Devil. This is arguably one of the heavier records, along with Menace to Society, but it's also incredibly consistent. Lizzy himself offers what might be the most professional and seasoned vocal performance of his entire career, his inflection textured and multi tracked to a crystalline clarity that sacrifices none of his youthful range, but perhaps a bit of the wavering, shrill timbre he once dealt out in the formative years of the band. Like the previous record, there were a number of guest musicians involved in this, particularly the lead guitars and keyboards; only more diversified, with bigger names like George Lynch (Dokken), Dave Meniketti (Y&T), Erik Rutan (Hate Eternal, Morbid Angel) and Corey Beaulieu (Trivium) all contributing seamlessly to the overall style and sound.

Most importantly, though, this is a fairly inspired crop of songs that would have formed a superior natural continuity than did Deal With the Devil, had it been released in, say, 1992 or 93 as the band's fifth full-length. They definitely returned to more of that post-Maiden/Omen melodic riffing that characterized their tracks in the 80s, and many of the vocal lines are kept fresh and memorable, especially in tunes like "The Death of Love" or "Appointment With Death" itself. Choppy, harried dual guitar melodies cut through "Tomorrow Never Comes", and I love the lower, brooding melodies that inaugurate "Somthin' Crawlin'". I realize it probably had a lot to do with the guests, but the leads throughout the record are well-paced and passionate, especially in the song "Under Your Skin". The band even breaks out a series of successful, heavier grooves to support "Bloody Tears" without coming off trite, cheesy or tough guy in that treacherous Pantera aesthetic.

There are still a few tracks that don't hold up for me as well as others, like "Live Forever", "Perfect World (I Don't Wanna Live") or the acoustic bonus rendition of "Tomorrow Never Comes", which I like considerably less than the electric version, but I'd say that in general this album has a solid core of 5-6 pieces well enough conceived to mesh with the band's backlog in their set lists. The production is bright and meticulous, Lizzy stretches himself to a firm, full range of highs and mids, and the guitars are often exquisite. Not enough that I'd recommend this over a Visual Lies or Love You to Pieces for those first visiting the band, nor would I take this over any of the 80s records, really, but it's ample evidence that there's some life left in the old axe murderess. With good fortune and healthy tidings, we won't have to wait another seven years for album #7, but even if we do, I just hope it's as fluent and lively as this.