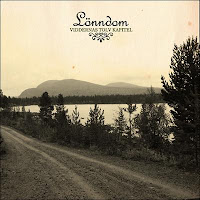 To qualify Lönndom's sophomore effort Viddernas tolv kapitel as merely ' mood music' would seem an understatement, for its appeal is restricted not only by its dark, emotional range, but also the psychological geography mapped out by its dreary, rustic arrangements. Members A. Petterson and S. Sandström (aka Graav) have distanced themselves not only from their black metallic alma mater Armagedda, or Sandström's great occult rock outfit LIK, but even from the debut of this very project, Fälen Från Norr, which had been molded in more of a black folk/doom environment. The desolate and nature-infused lyrical aesthetic has been retained, but this album is one of stripped down, brooding folk elements delivered through an extremely limited instrumental palette.

Fortunately, that is all Lönndom requires to create a dour, haunting and often hypnotic experience here. Their chosen implements of escapism: beautiful acoustic guitars, deep Swedish vocal harmonies and samples of winds and wilderness layered in to provide the feeling that you are truly outside listening to this. A bloody hour of this, with very little variation in theme or execution, but nonetheless it sinks its hooks into you by the second track "I vattnets flöde" and never really lets go. While it would be difficult to appraise the guitar patterns as unique for anyone into the darker side of folk, they are methodical in that they capture a rural, early 20th century flair that pairs well with the lower range of the vocals. Both members play, both members sing, and you can just imagine the duo wandering the lakeside and landscape of the cover image while they composed the 12 tracks and 60 minutes of pure, rhythmic meditation. Individual tracks vary in structure to the extend that the longer pieces like "Vindaflykt", at over 9 minutes, has more room to breathe and experiment with purely guitar sequences, but the tools of the trade never change: don't expect a symphony to burst forth, or a black metal riff to somewhere erupt, but you might be entreated to the sounds of birds chirping from the distant woodland eaves.

Like anything with the lyrics and vocals in Swedish, my oafish understanding is limited to only those words I've found familiar from other song titles, so naturally this created a bit of an obstacle in my ability to fully explore the album's subject matter, but would not prove the case for native speakers. Regardless, Viddernas tolv kapitel is effective enough that it transcends the linguistic barrier with its unmistakable atmosphere, a music of sadness and back roads and lost times and reflection. It's also just about as honest and 'minimalist' as one will find in the spectrum. The dry tones of the vocals and the plucking of the strings are sauteed in zero studio gimmickry, and aside from an obvious, fundamental appreciation of classical and folk guitar, there is zero technicality. The 'riffs' manifest one at a time, with minor variance between the two guitars. Favorites included "Höstdagar" with its vocal and sampled-shore swells alongside the mesmeric, melodic picking pattern, and "Skaldekonst om ljusets återkomst" which includes a rare percussive element (tambourine?), but all told this is a compelling, if conditional experience for one willing to put him or herself in the proper perspective for its consumption. I recommend late autumn or early winter, on a rustic stroll or in a cabin far from the world. The more Walden Pond, the better.