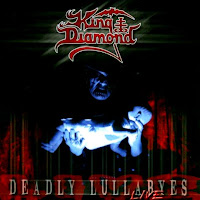 Deadly Lullabyes Live is a far different beast than the first King Diamond live album In Concert '87: Abigail, because let's face it: by the 21st century, the man's career was no longer one of rampant escalation, but an institution in the metal world. Naturally, there was far more content for him to draw upon when putting this together, and a lot more experience under his belt. Andy LaRocque himself did a lot of the studio mastering and mixing for this double album, which was recorded on The Puppet Master tour in late 2003 here in the US. The lineup on these gigs also featured long term collaborators Hal Patino on bass and Mike Wead on second guitar, with the seasoned American Matt Thompson holding down the drums.

The production here is a lot stronger than the previous live album, with a lot more pump to the rhythm guitars that helps balance off against LaRocque's noodling, which I needn't tell you is fantastic. The drums have a great mix, and Patino also sounds fantastic. I'm sure these selected pieces aren't the best King himself has delivered vocally through his career, and yet despite any flecks of age on the old bastard he does a damned good job in both ranges, consistent delivery that feels only a little tired or sluggish once in a great while. In general, though, you can tell that a great deal of care was placed in arranging the material so it would burst out of your stereo speakers, there is just no half assing of anything and thus it swiftly becomes the ultimate King Diamond live audio available.

So, really, the crux of Deadly Lullabyes quality rests on the track selection, which is drawn from all over his career sans the inclusion of reliable Mercyful Fate material. From the classic (1986-1990) era of the band we're treated to "No Presents for Christmas"; "Halloween" (Fatal Portrait)"; a huge chunk of Abigail that includes "Funeral", "A Mansion in Darkness", "The Family Ghost", and "Black Horsemen" (in which the clean guitars sound quite good before the metallic surge begins"); "Welcome Home" and "The Invisible Guests" from Them; and "Sleepless Night" from Conspiracy. I was particularly excited to hear material from The Eye, my personal favorite King Diamond record, and was very satisfied that at least "Eye of the Witch" and "Burn" showed up here. The Spider's Lullabye, Voodoo, The Graveyard and House of God  are entirely omitted from the selections, which is fine in the case of the latter, weak albums but I wouldn't have minded one from each of those first two.

Instead, much of the more 'current' material as of the live recording was drawn from Abigail II ("Spare This Life", "Mansion in Sorrow", "Spirits" and the "Sorry Dear" outro) and the album they were touring for ("Blood to Walk", "So Sad" and the titular "Puppet Master"). All of it sounds pretty flush with the classics, though I don't particularly enjoy The Puppet Masters as much as anything else here. There do seem to be a good number of the intro/outro tracks clotting up the set list. This is fine for an actual full set, but I think that all things considered, I'd rather have full songs if the track list is going to be drawn from numerous dates. Intro and vignettes are important to psych up a crowd, but not so much on a collection like this. In all, this wasn't supposed to be a 'career retrospective' but might have used a better balance from those forgotten earlier 90s records, otherwise it's a strong 100 minutes.

Deadly Lullabyes Live might not be a Live After Death or Live Without Sense to me, personally, and it doesn't function as a record I feel compelled to sit through as a substitute for any of his massively awesome early studio albums. Yet it's still a reasonably loaded value for the diehards with a more corpulent sound to it than its predecessor that was released in 1990. While you still have the chance, though, and while King is still touring, you really ought to get out and see him, because on CD the experience is just not the same.